We split lives between 2 homes in 2 countries 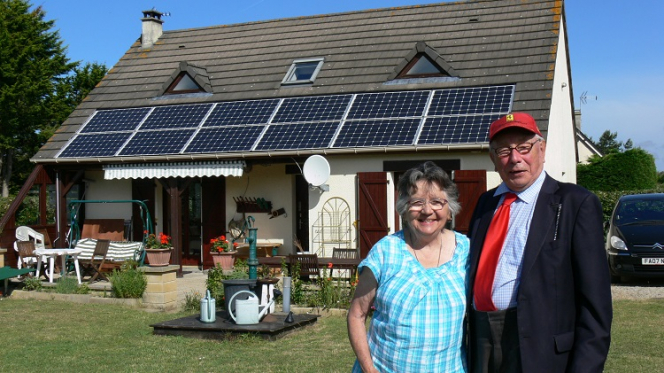 Ronald and Grace Lampard are both in their 80s and enjoy their double lifestyle. Before he retired in 1989, Ron was a doctor, and Grace was a nurse. “I married my sister,” joked Ron.

Married for 56 years, they have three grown-up children and have  been splitting their lives between Port-Bail in Normandy and Market Harborough for 15 years.

Ron said: “I bought the house in France as a bolt-hole when Tony Blair took us into the Balkan war. Because I was a child on the south coast, I remember the war all too well.

“We looked at Ireland but property prices were too high, so we went to France and fell in love with Normandy.”

Having been treated for coronary thrombosis in France, Ron was very impressed with the French healthcare. “Even though my French isn’t great, the staff were friendly as well as technically very accomplished. In the UK, staff are too pushed for time to be human.”

He and Grace found Phonexpat useful in both countries and say that generally finding solutions to the problems posed by living in two countries is pretty easy.

Having two homes makes life a bit more expensive, but they enjoy better weather and longer daylight hours during the winter in France.

“We are British tax-payers, so we spend less than three months at a time in Normandy, totalling less than six months per year. We prefer to split our time rather than move to France, as we have family connections in both countries.

“We also love Market Harborough and the canal at the bottom of the garden.”

Grace admits having two homes can be a lot of work and does require organisation as both houses have large gardens and vegetable plots. But she says they have simple tastes and most things are duplicated. “The printer and scanner are identical in both places, so we can’t forget how they work. The only downside is not being able to be in both places at once.”

Grace also wonders about the future, and how long they will be able to continue their trips.

Roger Preston (70) and his wife Anne Moir (65) split their time between their house near Watford and a flat in Les Gets ski resort in the French Alps. Roger worked in IT, and Anne in marketing, but they are more or less retired now.

They love skiing and especially in the Portes du Soleil area, which is why they bought their flat around eight years ago. “We come regularly in winter and now we also come in summer,” said Roger.

The attraction in summer is walking and enjoying the beautiful weather in the mountains. “It doesn’t get too hot at night as we’re at 1,200m.

“And it’s healthy here, because we’re above the inversion layer, meaning there’s no UK gloom.”

They also love French food, baguettes in particular, and, as they drive through France four times a year, stock up with wine on the return to the UK.

Roger said an advantage of keeping the house near Watford is that they can look after Anne’s mother. “We’re not running away; we don’t have anything to escape from in the UK. We feel at home in both.

“But it’s not a holiday. It’s just living somewhere else. We cook, clean, shop and do laundry just as we do in the UK.”

Anne says her daughter thinks buying the flat was the best thing her parents ever did. “She’s a busy lawyer so loves relaxing here. We can all work remotely from here which makes life so simple.

“You just take your laptop and you’re done. We don’t take much luggage to and fro really, just laptops.”

Anne’s big tip is to get a flat near an airport, to make transfers simple and cut journey times. “To get the use from the flat it’s important we can come for the weekend. We’re just 1hr15 from Geneva and that’s as far as we would like to be.”

They use their smartphones to control the heating in their UK house and Anne said: “It’s nice to have the heating and hot water on when you arrive.”

Another advantage is they can have work done on their homes while away. “It means arriving to find lots of cleaning, but we have very trustworthy contractors, and being away means not living in the middle of a building site.”

If her French were better, Anne says it would help with contractors and talking to doctors etc, “but it was OK when I broke my leg. I was reimbursed via my EHIC card but the rules seem to be changing all the time.”

So she says it is important to keep up with the regulations and be properly insured “just in case”.

Suzanne (61) and Tony Budd (73) retired and left the UK six years ago. Suz­anne, a maths teacher, and company director Tony now spend about seven months a year in their home in Poitou-Charentes, and five months in Lake Taupo, New Zealand.

They say it is essential to be well organised as there is no question of “popping” back to the other house should a problem arise.

Suzanne is from New Zealand and most of her family still live there, including her three grown-up children, which is why they decided to split their time between NZ and Europe.

“We chose France instead of the UK, because we both love France so much,” said Tony. They enjoy two summers a year and don’t miss winter at all. “We’re not ski fans,” they said.

Tony said the downsides are putting friendships on hold for six months, and the tiring travel. They fly from Paris to Auckland and say they pay less than they did six years ago. “You can fly economy for about €1,150 return each... we’d probably spend that on winter heating.”

It is important to have properties which are cheap to run, and are easy to lock and go. They pay someone to keep their French garden (3,000m2) tidy but the New Zealand one looks after itself.

Tony said: “This lifestyle is there for the taking, all you have to do is go for it. There’s no hassle spending time in New Zealand if you’re British – get an automatic six-month visa – and it’s very easy to find house-sitting assignments there as New Zealanders like travelling and want people to look after their homes.”

Both said organisation is key. They use the post office mail re-direction services in both countries and use Teleconnect for French internet/phone, so they can suspend it when away.

They have a car in each country. “Just before we go we add fuel stabiliser to the fuel and disconnect the battery. Then when you arrive, you just re-connect the battery and the car runs as normal. We have never had a problem.”

Suzanne says their lifestyle gives them the best of both worlds. “I haven’t bought a winter coat in years. I do sometimes put a cardigan on, but we’ve almost totally got rid of all our winter clothes.”

“I tend to buy shoes in France and take them to New Zealand because they’re cheaper in France. But you can’t take foodstuff; no food, no seeds.”

She admits she misses good cheese in New Zealand, but says New Zealand wines, which are not readily available in France, are very good.

“We read on Kindle so we don’t worry about leaving books behind and we have UK iPads to download books as books are very expensive in New Zealand.”