Willing to pay price to look and feel good 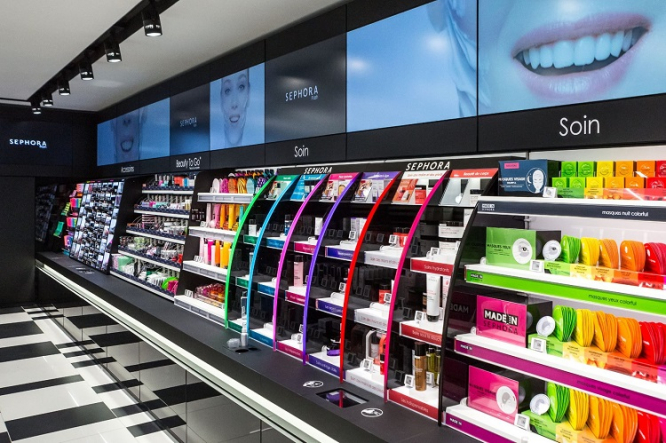 Cosmetics can take up a floor of a shop and, for feel-good market leader Sephora, the shop
By Jane Hanks

Even the smallest towns have at least one hairdressers and may even have a beauty clinic while a survey by beauty products retailer, Escentual found that French women spend £1.9billion on skincare each year whereas UK women spend around half that at £854million.

The survey also revealed that more than a third of French women start using skincare cream when they are 15 compared to aged 25 for British women.

Pascale Hébel, director of consumer affairs at living standards research group Crédoc, said the message continues to be passed on from mother to daughter in France that it is important to make an effort to look good:

“Historically body image has always been important and women in France still exist through their image.

“With the great cosmetic companies like L’Oréal based in France there has always been a lot of advertising promoting beauty. The emphasis is above all on the face and hair, the most visual aspects.

“Women wear more make-up than in other countries.”

This was a particular point for cosmetics queen Helena Rubinstein who, when she first started in France, said one of her aims was to “teach moderation” to Paris women.

Mrs Hébel says the fact from early on women went out to work rather than stay at home increased emphasis on image:

“With the culture of the working woman has come the need to look good when you are out in public.

“Younger girls want to look more mature whereas the older generation want to keep looking as young as possible for as long as possible. And neither age group can do this without help from a bottle, so they turn to beauty products.”

There is also pressure to be a wonderful looking mother and this year luxury perfumerie and cosmetic company, Marion­naud led its Fête des Mères advertising campaign with the slogan “Born to be a beautiful woman.”

Unsurprisingly, it did not go without criticism, but, as Mrs Hébel points out, it shows that women are still expected to look perfect.

That is why international beauty store Sephora started in France – women know they want to look better and Sephora, with its vast range of products and sales assistants keen to give the client the best advice and the best product for them, was able to offer them something department store counters could not – independent advice and help to look their best.

However, Mrs Hébel says the codes for how women look are indoctrinated at an early age.

Going to the beauty parlour to have your legs waxed and buying your first skin care cream and make up is a normal part of growing up for a girl in France.

However, she does think it is slowly changing: “We see with the opening up of Europe that younger generations are looking at other ideas and that differences between countries are diminishing.”

As for slimming products, she said: “They have had a bad press and we tend to be suspicious. The French way is to put the emphasis on a good healthy diet.

“Women do watch their figure from an early age but they tend to cut down on what they eat rather than resort to a slimming product. However, it’s ok for men to be bigger, a corpulent figure is still associated with wealth.”