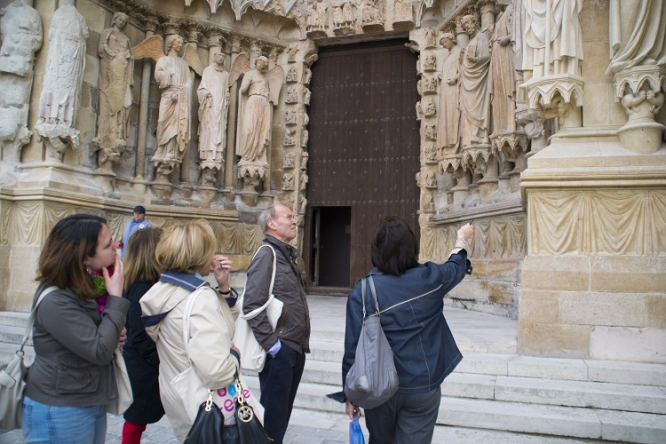 Greeters are volunteers with a passion for their city or region who give up their time to welcome visitors from around the world and share their love of where they live by taking them on a walk to show them special spots of interest and giving advice about what to see and where to go.

They feel that ‘real tourism’ offers a true exchange between visitors and locals and should not just be about paying for services. They believe it can give the visitor the opportunity to visit the real and sometimes hidden landscapes of their region.

The idea came from an American woman, Lynn Brooks, who in 1992 wanted to erase the negative image of New York at the time and wanted to show off the city she loved. She proposed a series of unusual walks organised by locals in the Big Apple.

The concept spread to Europe but it is in France where it has had the most success and there has been a national association, France Greeters, since 2011.

There are 1,400 greeters in around 50 towns and regions. Each area organises themselves differently but the idea is that a visitor who wishes to have a Greeters’ tour signs up via the internet and the local association liaises with the person to fix a time and a welcome suited to them. Often there are different tours proposed for an area. Visits are limited to groups of six people and are free.

Christian Ragil is the Chairman of France Greeters (www.greeters.online) and has been a greeter himself for the past 10 years in Paris since he retired and says he takes a group out between 10 and 15 times a year.

He said: “There is a lot of pleasure in meeting people from all over the world and it can mark the beginning of a friendship.

“I have stayed in contact with some of the people I have showed round. Our aim is to be able to welcome visitors in this way all over France and we are beginning to work with regional authorities to make our presence known.

“I worked abroad for 25 years and I often heard people say that France was beautiful but that the people weren’t friendly.

“We want our greeters to be an ambassador for the country who will introduce visitors to the French art de vivre with a smile.”

Around half of the greeters are retired and many have worked abroad and are keen to keep up their foreign-language skills. Many also have an interest in local architecture, history or nature. About half, though, are aged 25 years and upwards and they usually offer to meet people at the weekend. What interests us is people who know their town or their region, have an openness of spirit and really want to show and share their local knowledge,” said Mr Ragil.

“About 70% of visitors using the Greeters service are foreign so a good level in a language, particularly in English, is very useful. If there are any Connexion readers who would be interested in joining us we would love to hear from them.

“If there isn’t one in their town we would be happy to give advice so they could set up a group.”

If you become involved let us know about it at news@connexionfrance.com