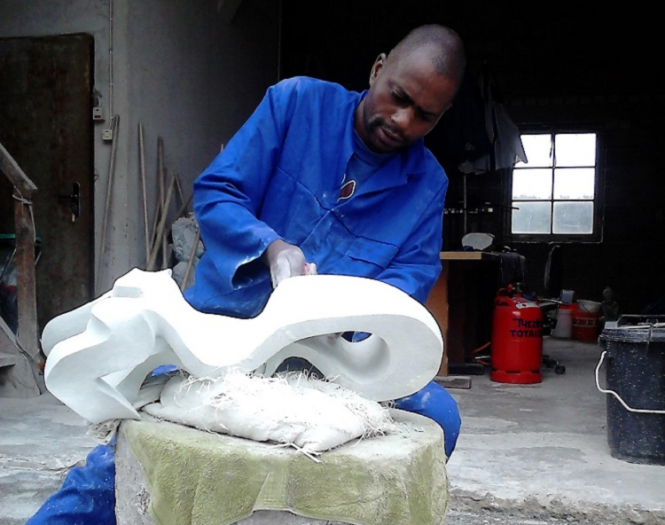 Called Shamwari, the association was founded by Shayne Girardin, who is originally from Zimbabwe and has lived in France for several years. She brings artists to France where they stay with her and put on exhibitions.

She said: “These creative people with immense skill want to be recognised as real artists and by bringing Zimbabwean art and culture to Périgord, the country can be known by its artists and their art, rather than its economic difficulties and politics.

“Hopefully, too, through the exhibitions, the artists can sell some work. It is hard for them because they have to leave family and friends for several months but they feel it is worth it.”

Mrs Girardin says Shamwari started by accident in 2007. “I taught English at Avignon University and a student suggested we do something cultural for the country that I so often talked about. So we did. It went well and became an annual event!

“Each year, the remaining paintings and sculptures came back to the house we had bought in the Dordogne as a chambre d’hôte, which became a home gallery Confluence(S).

“Artists came and stayed in summer and we decided to create an association, which gives them more credibility when exhibiting in Europe.”

Rickson Zavare, 42, an abstract sculptor took part this year. He works in the stone for which his country is famous – Zim­babwe means ‘big house of stone’ says Mrs Girardin, adding “There are many stone sculptors, so standing out is difficult.

“Rickson has done exactly that; he is very talented. He has exhibited and put on demonstrations in Pro­vence where I still have contacts from my Avignon days and in Germany.”

Goodson Mlera, 28, is also a stone sculptor: “His work is more figurative, and powerful in its family and social values. It meant a great deal for him to be here. His wife gave birth two weeks after he arrived and it was difficult to miss that. He and his wife discussed it and they knew he had to seize the opportunity for international recognition and interaction.”

Shamwari takes 15% of sales where possible for its work and exhibitions.

Mrs Girardin said: “In France not many people know much about southern Africa because their links are more to northern Africa.

“We have done many visits to schools with the artists and we hope that if children now see a black person they will think that maybe that person is an amazing artist.”