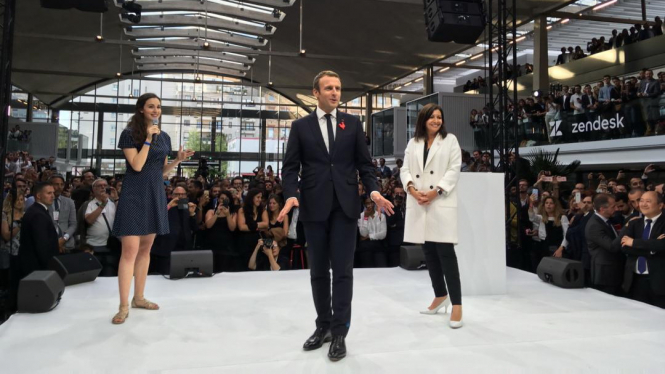 The project, which is the brainchild of the founder of telecoms firm Free, Xavier Niel, is being housed in a 34,000m2 former railway building near the Bibliothèque François Mitterand on the south bank of the Seine.

It is hoped it will give a massive boost to the capital’s already thriving start-up culture and help launch future high-tech giants ‘made in France’.

The launch was originally hoped to be in April, but it hit delays due to flooding on the site.

The entrepreneurs involved are joining one of 26 different programmes being run on the site, which together offer 3,000 start-up desks.

Some 2,300 start-ups from around the world applied to take part in its ‘Founders Programme’ alone, with 200 being picked. For €195/month it offers very early-stage start-ups from anywhere in the world a full-time residency as well as various workshops, help from experts and special offers.

Other programmes include Facebook’s Startup Garage and Impulse, run by Vente Privée.

Applications are now open for Station F’s latest project, the ‘Fighters Programme’ which aims to welcome entrepreneurs from underprivileged and rural areas, especially those who have faced adversity in life such as having been refugees.

Applications are invited until October 2, and those selected will join the campus in January next year.

They will have access to the same resources to those on the Founders Programme, but free of charge for one year.

Ms Varza said in a statement: “Now the real fun begins. We’ll get to see the campus in action, with thousands of entrepreneurs building innovations of the future every day.”

Later this year a ‘massive’ 24-hour restaurant will open on the site – open to the public – and in summer next year an extension opens offering accommodation for some 600 of the users of the site.