250 held in Paris after violence mars May 1 protests 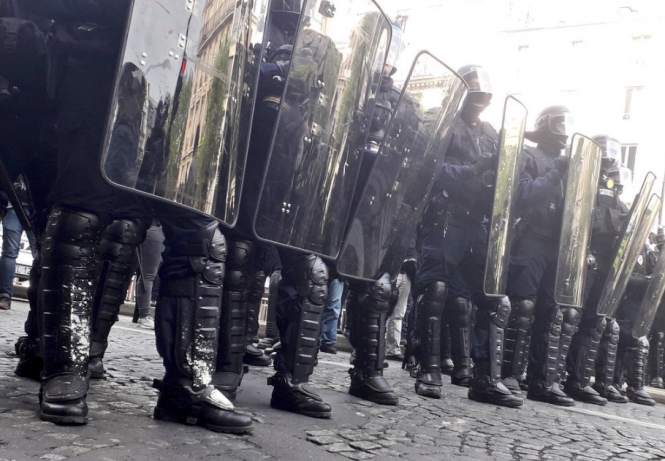 Nearly 300 marchers were arrested across France during the traditional May 1 protests, with the majority of that number detained during violence in Paris.

Of the total 288 arrests nationally, 250 were in the capital - where, according to the Interior Ministry figures, 20,000 took part in the protests. The CGT union said the figure was around 55,000.

The number of arrests in Paris was higher than in 2018, when 109 people were remanded in custody after police were caught by surprise when trouble-makers embarked on a vandalism spree.

Authorities had had been expecting trouble at this year’s May Day marches following months of gilets jaunes protests. Anarchist and other anti-capitalist groups had issued calls on social media this week for Paris to become “the capital of rioting”.

A few pictures of the #1ermai march that is still taking place in Paris. #GiletJaunes pic.twitter.com/36lHp1F2mE

Interior Minister Christophe Castaner on Tuesday said more than 7,400 police and security forces would be deployed in the capital in case of violence by protesters.

Streets and several metro stations were closed and hundreds of businesses had boarded up their windows along the route of the march.

Nationally, the Interior Ministry said 151,000 protesters took part in parades across France - with large gatherings in Nantes, Bordeaux, Marseille, Grenoble, Toulouse, Lille and Lyon - compared to 143,500 in 2018. The CGT union, however, estimated the total number of marchers at 310,000. Differences in counting methods between police and unions account for the markedly different numbers.

Been chaotic for a while now lots of tear gas and projectiles #1erMai pic.twitter.com/WZoYZUzKqZ

Police in Paris fired teargas as they squared off against demonstrators with clashes between police and protesters beginning at around 1pm. There was sporadic violence in Lille and Lyon, according to reports.

Clashes erupted on Montparnasse Boulevard, where anti-capitalist "black bloc" activists had joined gilets jaunes marchers and pushed to the front of the gathering crowd, hurling bottles and other projectiles at police, AFP reported from the ground.

Police also used tear gas against a group in Lille who were shouting "Macron, we're coming to get you", while there were occasional clashes in Lyon - but the 4,000-strong march there mostly passed off peacefully, police said.

The CGT's secretary general Philippe Martinez told BFMTV: "What's happening in Paris is not a reflection of all the marches. There were 225 today, and everywhere in France it went well."