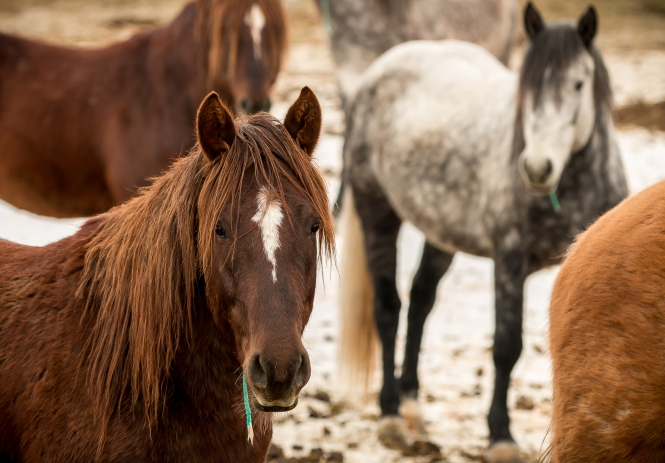 30 animals, including a reported 15 horses, were evacuated from the centre (Photo for illustration only)
By Connexion journalist

The Sept Monts equestrian centre in Samoëns was yesterday (Monday February 12) emptied of 15 horses, two donkeys, three sheep, three goats, and seven rabbits, after concerns were raised over the welfare of the animals in the cold weather.

According to reports, many of the animals were being kept outdoors day and night, with the conditions of the centre denounced by the local Mairie and veterinary services, who have reportedly been pushing for the construction of permanent shelters for its animals for the past two years, due to the region’s often-harsh winter weather conditions.

Samoëns is at the foothills of the Alps near to the Swiss border, with the centre run largely by just one woman working alone, owner Emilie Jauffret.

This week, an administrative decision was taken to remove the animals from the centre’s care, after a number of vets raised the alarm. Gendarmerie, representatives of the veterinary services, and two animal refuge and welfare associations, were on the scene, to help remove the animals.

“It was like Noah’s Ark!” said a manager at the refuge and welfare group Animaux Secours, based in Arthaz-Pont-Notre-Dame (Haute Savoie), speaking to news source France Bleu. “But at some point you have to be clear. Just one person working alone cannot keep this many animals. Some had cover, some did not.”

But owner Jauffret - a volunteer firefighter, who claims to have worked with animals for over 20 years - is now reported to be hiring legal advice and fighting for her “beloved” animals to be returned. Having filmed the entire removal of her animals, she is still “in shock”, reports said.

“Taking them away from me like that is unacceptable,” she said, speaking to France Bleu. “They will not even tell me where they are. Even criminals are treated better than this.”

Jauffret affirms that she has a right to raise her animals in the outdoors as she wishes, and has called her collection of animals part of her “wider family” that “she loves more than anything”.

“My animals are cherished; they have never had any veterinary problems,” she said.

“I ask all the farmers like me, to join me [in my fight], so that we can continue to keep horses that are not locked away in little boxes.”