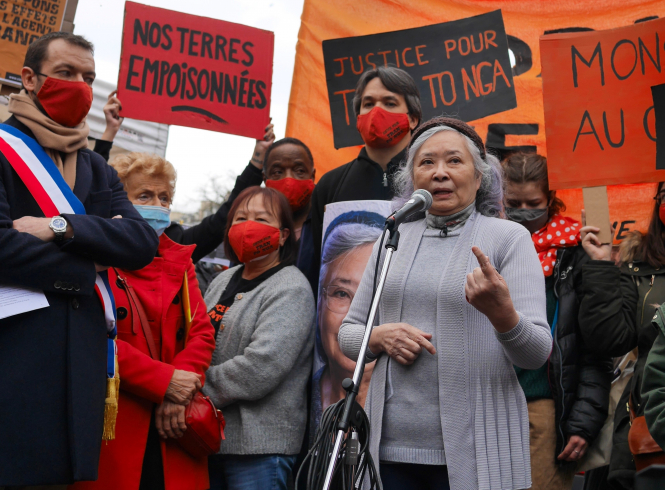 Tran To Nga at a demonstration about agent orange use during the Vietman War Pic: Mai Nguyen

A 79-year-old French-Vietnamese woman says she will appeal the decision by a French court to dismiss her case against several major agrochemical companies over use of Agent Orange during the Vietnam War.

She wants the companies to recognise their responsibility in damage she says they caused to the health of nearly four million people in Vietnam when millions of litres of highly toxic herbicide they supplied to the US government was sprayed over the country from 1961-1971.

She states a fourth generation of children are still being born disabled.

The court in the Paris suburb of Evry ruled on Monday May 10 that it did not have the jurisdiction to judge a case involving the wartime actions of the US government.

The lawyers for the multinational companies argued they had only obeyed an order from the American government.

At a press conference attended by The Connexion Tran To Nga said it was a victory even though they had lost.

“I am disappointed and angered by the decision, but I am not sad. We have won," she said.

“When I started six years ago I was alone with just five people helping me. Now, because of publicity surrounding this case, we have support from many thousands of people around the world who are aware of this crime against the Vietnamese people…

“I am convinced my cause is just and I will continue to fight for the sake of those who are much more unhappy than us and I will survive myself until the end of this struggle.”

Tran To Nga says she is in poor health and suffering from five illnesses which, she claims, are connected to Agent Orange.

She told The Connexion she was exposed to the herbicide on several occasions from 1966, and as a result has Type 2 Diabetes, cancer, a weak heart, has had TB twice and has a rare allergy to insulin.

Her first daughter died with heart malformations, her second was born with a malformation of the spine and her third daughter is obese, which she says is another recognised health consequence.

Lawyers acting for Tran To Nga say the French courts have the right to judge a case like this because in 2013 the French parliament agreed that a French national may take a case to court in France for a crime committed in a third party foreign country.

They claim that the Evry court applied an obsolete and very strict interpretation of the law.

Lawyer Amélie Levebre said they also refute arguments from the companies’ lawyers that the firms were acting under orders from the American government.

“They had answered an invitation to tender and they could decide whether to answer or not,” she said.

She said there needed to be full disclosure of all the documents relating to communications between the companies and American governments at that time.

“We are confident in the arguments we have given and will now reinforce our arguments and prepare our case for the Court of Appeal.”

She said it is impossible to say how long it will take before the case is heard again, but it could take years.

In 1984, a lawsuit by veteran soldiers in the US against the major manufacturers of the herbicide was settled out of court for $180million.

The US Department of Veterans Affairs offers health and disability benefits for Vietnam War veteran soldiers and their families, but there has never been any compensation for the Vietnamese.

French-Vietnamese woman in fight of her life on war chemicals