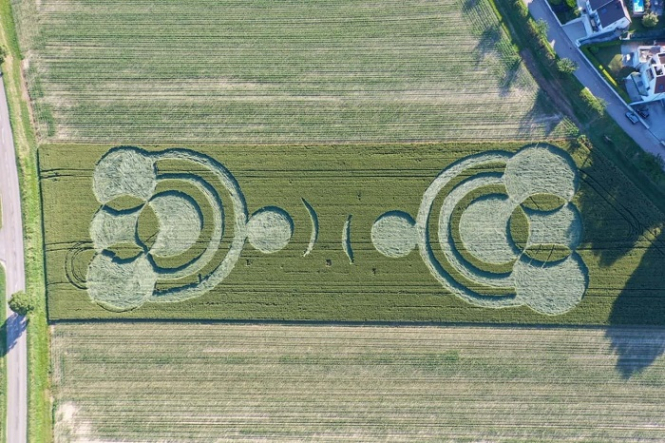 But these crop circles were actually made by secondary school students as part of a maths project.

Teacher Françoise Evrard took 60 of her pupils to a field in Blaesheim, Bas-Rhin, to teach them how to make the designs.

“The aim was to do applied geometry, to have different viewpoints and to develop the critical faculties of children who could see that crop circles are not the work of aliens,” she said.

Learning how to make perfect circles was the lesson. It took several hours for the pupils from Le Gymnase Jean Sturm school in Strasbourg to master, using planks of wood to flatten the wheat.

The idea came to Mrs Evrard last year but she had to find a farmer willing to take part.

Mrs Evrard said: “The group was happy with their work but surprised at the extent to which it took off in the media and the reaction of people online.” People came from  Swit­zerland and from  Germany to see the “alien” circles and some even put forward  theories on how they represented parts of the solar system.

Mrs Evrard later made use of the phenomenon for a lesson on fake news.

Although there is no mystery about the crop circles – known in French as cercles de culture or sometimes agroglyphes – in Blaesheim, the creator of another one in nearby Saint-Hippolyte, Haut-Rhin, has not been found.

Others have recently been spotted in areas including Val d’Oise, north of Paris, and Indre-et-Loir, south west of Paris.