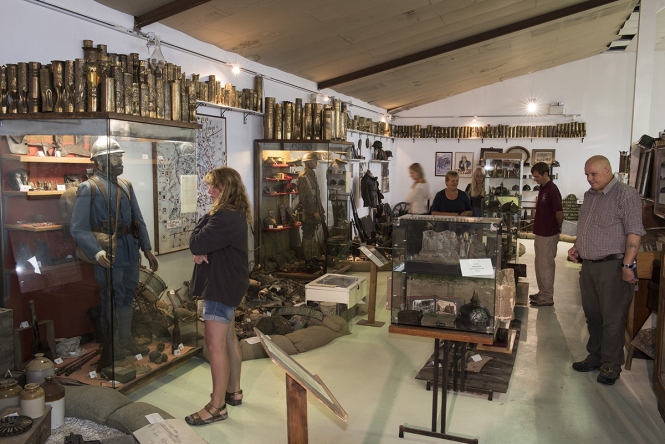 Her home is in the middle of the former Somme battlefield in the village of Auchonvillers – which was known to the Tommies, inevitably, as “Ocean Villas”.

Not that Avril knew much about World War One when she bought her house. The day she became its owner was July 1, 1992... she did not even know that was the anniversary of the first day of the Battle of the Somme.

She does now. Avril has become an expert on the Great War and her Ocean Villas guesthouse is a magnet for battlefield tourists from all over the world.

Lord Of The Rings director Peter Jackson, creator of the World War One documentary They Shall Not Grow Old, recently called in to eat – and have his picture taken with Avril.

It all started in the cellar.

Auchonvillers was reduced to rubble by the war and Avril’s house was rebuilt in 1923. When she was buying it, she looked round it with an architect, who spotted that the cellar dated from the 18th century.

It was only after she moved in that the graffiti was noticed: the brick walls were covered in carvings left by British soldiers who sheltered down there when the cellar formed part of the allied trench system.

Research into those scratched names has revealed that some of those men survived – the guesthouse has since been visited by their descendants – but others were less lucky and are now commemorated on memorials nearby.

Most poignant is the carving left by 21-year-old rifleman James Crozier, who had been found wandering dazed behind the trenches. He spent time in the cellar before being shot at dawn for desertion.

Enthusiastic volunteers have since excavated one of the original trenches in the back garden and visitors can walk there, in the footsteps of those soldiers of a century ago.

Avril believes she was “pushed over” to France for a reason. She was born in Gloucestershire, then settled in Coleby, Lincolnshire, and was a parish councillor with a family and a regular job when her circumstances suddenly changed. Her husband left, her mother died and she was made redundant.

She moved to Auchonvillers with her 14-year-old daughter and 10-year-old son to help her sister run a B&B. It was not ideal, so after she sold her house in England, she bought a ruined property in her sister’s village.

It had just one cold tap and the only lavatory was a hole in the ground leading directly to the fosse. She said: “My neighbour thought I must be mad. A woman on her own with two kids? Then he saw me up on the roof.” Within a year, Avril’s B&B was open with one letting room.

Twenty-five years later, she has five en-suite rooms and an apartment in her house and has converted the stables to a tearoom.

She has expanded over the road to create a conference centre, three apartments and an office.

In 2008, she opened a museum after buying France’s finest private collection of war memorabilia – and not just from World War One.

The collection includes the distinctive striped jacket and skirt of a Nazi concentration camp uniform.

Ocean Villas has come a long way since son Mark used to show visitors the rusty rifles and ammunition he had scavenged from the fields around the village. Now grown up, he and his French wife Judith live over the road with their two children and work with Avril at the guesthouse.

Ocean Villas is a full-on job. Avril says: “This weekend we’re completely full and we’ve got three buses coming on Saturday and five on Sunday, with 170 members of the British Legion.

“We get school groups of up to 140 at a time, and we feed them all in an hour. Everybody has to pitch in but it’s a nice atmosphere here.”

Daughter Cathy still lives in the village, with her French husband Cyril and their three children, who are now getting old enough to “pitch in” too.

Cathy works at the recently-opened Sir John Monash Centre in Villers-Bretonneux, which commemorates the Australians who came to fight on the Somme. “It’s a great job and I’m really proud of her,” says her mother. In 2013, Avril was awarded a medal for her contribution to local tourism. “The whole village turned out for the event. I was amazed,” she said.

Avril is now 73 but shows no signs of easing up. She is negotiating to buy the redundant water tower next door, intending to create a battlefield viewing platform on top and to build 10 self-catering rooms to make it easier to host seminars. “I do want this place to be a learning centre,” she says.

She also hopes to reopen the cellar with a safer entrance. It used to be a popular attraction, but tours were taking up too much of her time – and visitors kept falling down the stairs.

Sister Julie, who brought her to France in the first place, has returned to the UK, but Avril has no intention of leaving. She owns a plot in the local cemetery – her corner of a foreign field that will be forever England.