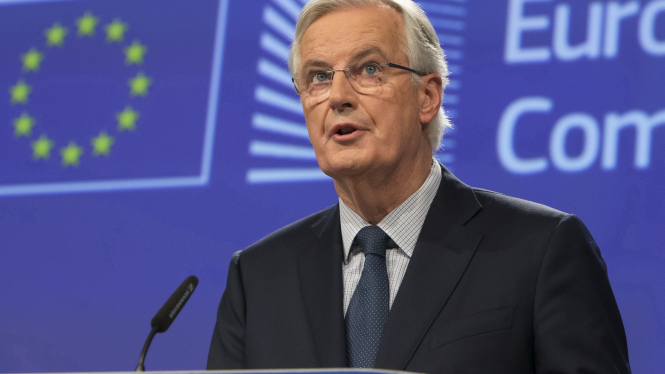 It comes as British media report diplomatic sources as saying that the EU may propose to put Brexit off until as late as June next year.

Crucial decisions as to chances of an agreement are expected to be made at a European Council summit of EU leaders on Thursday and Friday next week ahead of the current Brexit day of Thursday October 31.

The Benn Act (recently passed by the UK parliament) says the British prime minister must ask the EU for an extension by Saturday October 19 if no agreement has been agreed to by Parliament by then. In a submission to a Scottish court last week the prime minister said he would comply, despite previously having insisted the UK would leave the EU by the end of the month.

The UK is expected to leave without a deal on October 31 if there is no agreement, signed off by the UK and EU parliaments, or extension unanimously approved by the EU leaders, by then.

Last night the UK parliament was prorogued again – for just a few days – meanwhile last-minute Brexit ‘technical discussions’ between UK and EU teams are continuing today and in coming days.

In a tweet yesterday European Council President Donald Tusk accused the UK of playing a “stupid blame game” over whose fault it is that no agreement has yet been reached.

Further controversy was sparked when Reuters reported that an unnamed British source had told of a phone call between German Chancellor Angela Merkel and Mr Johnson yesterday in which she allegedly said a deal was now “overwhelmingly unlikely” and insisted that the UK cannot leave the EU without leaving Northern Ireland “in a customs union and in full alignment forever”.

The source said if this represented “a new established position… it means a deal is essentially impossible not just now but ever”.

However a spokesperson for Ms Merkel's party is reported to have rejected this account of the call.

In an interview with Les Echos this morning, EU Commission President Jean-Claude Juncker said: “I do not accept this blame game consisting of putting the responsibility for a possible failure of the negotiations on the European Union.

“If such was the case, the explanation is to be found on the British side.”

He added: “The original sin is to be found on the islands and not on the continent” but that “no one would come out as a winner in this scenario.”

Mr Juncker said a no-deal Brexit would “bring a collapse of the UK and a sharp weakening of growth on the continent”, adding that “losing a member state for reasons strictly related to internal, or rather sectarian, politics, is still a real tragedy”.

Relations between the EU and the UK after Brexit should still be “friendly”, he said, but they risk being “less close than with Canada”.

Following on from last week’s statement by the European Parliament that it could not accept the UK’s latest Irish border proposals  the parliament’s president, David Sassoli, said yesterday he had met with UK Prime Minister Boris Johnson but that “there has been no progress” and “there are two alternatives to a deal at this juncture: extension or no deal”.

He added: “We have examined the UK proposals to replace the original backstop and our response is that these are a long way from something to which the Parliament could agree. In addition, they are not immediately operable.

“Negotiations, I know, are continuing and the Parliament, through its Brexit Steering Group, is being kept fully informed by Michel Barnier of the progress on those talks.”

Next week will see the UK Parliament reopen for a new session on Monday, with a Queen’s Speech which will set out new laws the Johnson government wishes to pass.

However commentators think it will serve mostly as ‘PR’ for the government, ahead of a possible new general election.

This time the prorogation, which took effect last night, is less controversial than last time, because it is much shorter.

It brings to an end the longest session of a British parliament since the Civil War. It started on June 21, 2017, whereas most sessions last a year.​