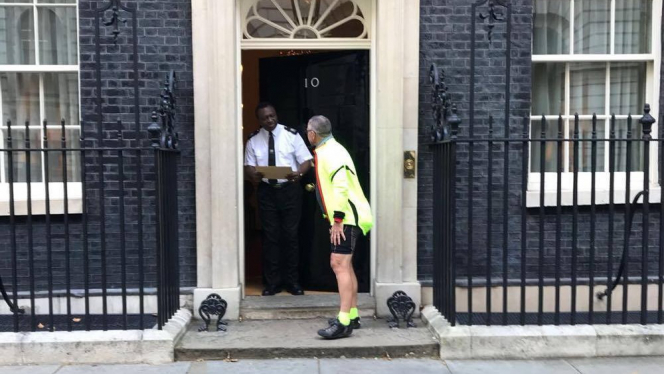 The new petition is on the government and parliament’s own petitions site, so would trigger an MPs’ debate if it obtains enough signatures.

He said: “I was met at the Downing Street gates and told where to walk, and went through security checks, then I met a policeman at the door and handed the petition to a concierge. He knew why I was there: he asked if this was the petition to cancel Brexit, and I said ‘yes it is’.

“I guess now I just wait to see if I get a response.”

Both petitions argue for MPs to have a completely free, unwhipped vote on whether Brexit should be cancelled in the light of current knowledge.

Mr Hearn said he handed in a letter to Prime Minister Theresa May which in turn refers to his change.org petition which obtained more than 15,000 signatures.

“My letter asks the Prime Minister to take the petition seriously, and there’s a form at the back of it that’s been signed by about 50 people I met along the way. That makes the letter itself a petition as well, which is important because they are not obliged to pay attention to the change.org one because they can’t verify addresses on it.newsletter

“I also refer to my new petition which still runs for five-and-a-half months. I am hoping for a lot of signatures on that, because it will have to be debated by MPs if it obtains more than 100,000. I’m keeping my fingers crossed.”

His seven-day ride through France and England, stopping with well-wishers on the way, finally totalled 732km, he said.

“The journey has been fantastic, although my legs feel like they need a rest and other parts of my anatomy are complaining even more.

“The weather’s been reasonably kind, with only short periods of rain and a couple of days of headwind. But it’s been great – arriving at places in the evening and meeting people I’ve never met before but who just wanted to give their support.

“Plus an old friend who was at college with me when we were studying marine engineering years ago, met me at Portsmouth, and even though he voted leave he cycled with me to Guildford because he appreciated what I was doing to get over my point of view.

“Then I was met by supporters who had been holding a vigil outside Downing Street.”

He said the point of the petitions is “to hold MPs to account”.

“It’s so that in the future, if things go badly for the UK, they can’t just say ‘sorry, but we just enacted the will of the people’. I want them to vote freely and if they vote for Brexit, fine, if they vote to cancel it, that would be wonderful.

"We’ll see if I get the vote that I’m petitioning for.”

Mr Hearn said he is leaving his bike in London now and will collect it in December.

He added: “The way I feel at the moment I could get on the bike and cycle back, but I think it’s not the wise thing to do.”