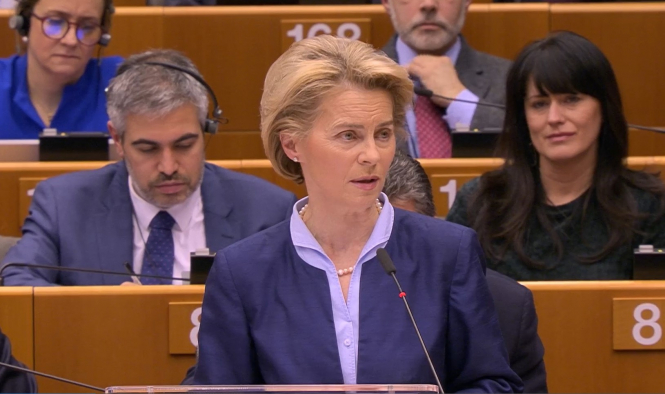 As the MEPs prepared to vote on the Brexit deal she said: “The more the UK upholds EU standards on social protection, workers’ rights, the environment and competition – the closer its access to the single market can be.”

She said the British car and aerospace industries have asked the UK government to maintain EU rules.

She added: “No new partnership will bring back the benefits of being part of the same union; but we have the duty to seek the best for the British and the European people in a post-Brexit world, for our farmers who want predictability, for young British and European students who want to study and live across the Channel and researchers and scientists who want to work for commons solutions together.

European Commission Brexit negotiator Michel Barnier said many regretted Brexit, but it resulted from a democratic vote and must be respected.

The WA would organise an “orderly withdrawal”, he said.

Brexit would have “innumerable consequences” but the treaty aimed to give legal reassurances to all those affected – “first of all, the citizens, for their rights - from the start of the negotiations their rights have always been our priority.”

In the year ahead they would continue with the same respect and objectivity, and “without any aggressiveness”, “but firmly defending the interests of the union and its member states”.

He added: “The perspective is that, beyond Brexit, the UK should remain a close partner, in economic terms, and ally, as it has always been, and a friend.”

The other key task this year will be ensuring that the provisions of the Withdrawal Agreement are all operational by the end of the transition period, including on expatriates’ rights.

In a final message he said we must listen to the feelings of the people which had given rise to Brexit and draw lessons.

He questioned whether defending national interests can be done solely at national level, and said people can be European as well as patriots.

“The European dimension gives more strength to our own national patriotism,” he said.