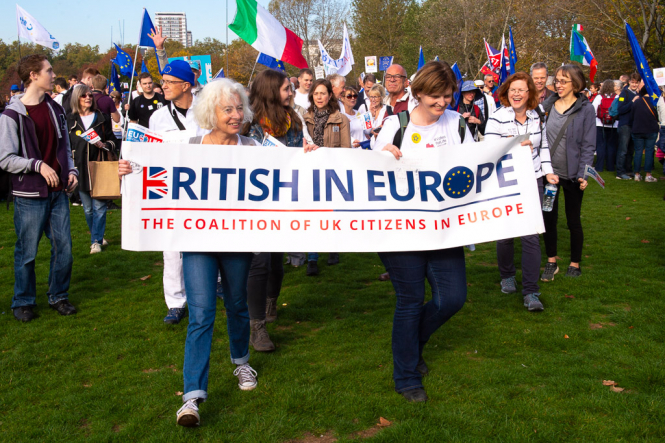 The British in Europe umbrella campaign group, which represents the interests of around 1.2million British citizens in the EU, is to wind down by the end of this year.

It will leave Britons with no wide-ranging body to speak for them.

During the Withdrawal Agreement (WA) negotiations and beyond it has worked to give a voice to Britons’ interests, running campaigns and meeting with senior figures in UK and EU politics to voice concerns on several rights issues affecting Britons in the countries where they live.

It is seen as having been instrumental in winning several key post-Brexit rights for Britons abroad.

However now it has no substantial funding other than ad hoc donations and is unable to continue.

Among its lobbying successes it states it was instrumental in persuading the UK and EU negotiators to extend the period from two to five years after which a WA Briton loses their rights in a country if they move away.

It also states that its lobbying resulted in the UK committing to a seven-year grace period in which young Britons in the UK may return to UK universities and study at the lower home fee rate instead of the high international rate.

It adds that it obtained from the UK government the current ‘grace period’ until March 30, 2022, under which mixed EU and British nationality couples may go back to the UK under free movement rules, rather than facing means tests, as opposed to this starting from January 1, 2021 after the transition period.

BiE has also provided information for Britons on their rights and obligations under the WA and the Trade and Cooperation Agreement.

Founded early in 2017, British in Europe (BiE), is a coalition of associations and social media groups, some international and others focused on certain countries, such as, in France, France Rights and the British Community Committee of France (BCC). It has at least one group in each EU state.

At its top level it has a steering committee, including co-chairs Jane Golding and Fiona Godfrey, British lawyers living respectively in Germany and Luxembourg.

It often campaigns in partnership with the3million, a group for EU citizens in the UK.

While some national bodies, such as BCC which represents British associations in France, existed long before Brexit, the UK’s EU exit vote was the catalyst for the creation of an umbrella body to represent the British in the EU.

Ms Golding said the decision to wind down had been a “very tough” one.

“We’ve kept going on a shoestring but you can’t continue working at the level we have been, like that. And we are also all exhausted doing this important work on top of our day jobs,” she said.

“We will not take on new issues from the end of October and will start winding down at the end of the year.”

The group said in a statement: “We have searched for large-scale funding, as opposed to limited project funding, with minimal success, because while our work is appreciated and respected, the rights of British citizens in the EU are not seen as a priority when placed alongside issues such as refugees or climate change.”

BiE’s French arm, France Rights, will wind down in parallel, although other national BiE groups with a broader remit, such as BCC, will go on.

France Rights said it was “set up specifically to advocate on and monitor the implementation of the Withdrawal Agreement in France, both of which we’ve done”. It added that it would start to wind down after the ‘second’ application deadline for Britons’ cartes de séjour on September 30, moving towards complete closure by the end of the year.

Ms Golding said France Rights leaders and BiE steering committee members Kalba Meadows and Kathryn Dobson had played key roles in BiE. "Kalba, with her Citizens' Advice Bureau experience, has been our grassroots information and outreach expert and Kathryn has been in charge of communication, marketing and social media since 2017 and built up our large and good quality twitter following."

Other partner groups working on aspects of Britons’ rights have expressed their regret at BiE's announced closure, including In Limbo Project, which posted to say they were “very sad indeed to hear that British in Europe are folding” and BHOV, whose founder Debbie Williams stated the group is “very sad to read this news”.

“We can’t say thank you enough for all they’ve done to represent our interests these last torturous years,” she added. “Without them things could have been a whole lot worse for us all.”

The Connexion has reported on work of BiE via our website and in most of our print editions in recent years, including many meetings at the highest levels, for example with the UK MPs’ Brexit select committee, EU negotiator Michel Barnier, the MEPs’ citizens’ rights taskforce, EU Parliament Brexit coordinator Guy Verhofstadt, the French Interior Ministry, then UK Brexit minister Stephen Barclay, and the post-Brexit joint EU/UK committee on the implementation of citizens' rights.

Its co-chairs were made OBEs in the Queen’s Birthday Honours this year.

Among other work, British in Europe: