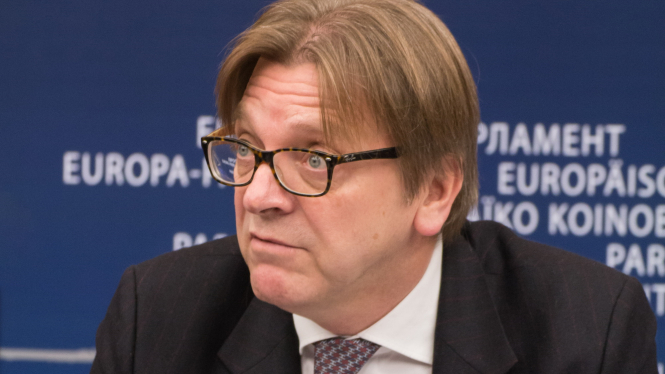 MEP Guy Verhofstadt has consistently stood up for rights of Britons abroad in the EU, including proposing an 'associate EU citizenship'
By Oliver Rowland

The European Parliament’s Brexit chief visited London yesterday to urge the UK’s Brexit minister to do more on expatriates’ rights.

The parliament’s Brexit coordinator Guy Verhofstadt spoke to Steve Barclay to seek his support for a resolution which was passed by the parliament this week by a large majority.

The resolution expressed concerns about some aspects of the way EU citizens are being treated in the UK, and also called for improved rights for Britons in the EU, such as allowing continuing free movement rights across the whole of the EU for Britons who are living in other EU countries before the end of the transition period.

The MEPs have called on Britain and EU states to provide more certainty and improved rights to affected citizens before they vote on their ratification of the Brexit Withdrawal Agreement at the end of this month. This will be the last step before the UK could leave with it in place.

Mr Verhofstadt said on Facebook he had a “frank” discussion with Mr Barclay and added: “A few adjustments from the UK and more action from some EU countries would end the anxieties of so many of our UK and EU-citizens who deserve certainty.”

Concerns about the situation in the UK include the fact that EU citizens are required to apply to stay in the UK rather than merely registering their rights in a “declarative” process, and also that they will have no physical card to prove their rights.

The MEPs’ resolution also spoke of anxiety that had been caused by recent announcements by a home office minister that EU citizens who missed the deadline for applying for their new status could be deported.

With regard to the British in Europe, the resolution calls for improvements such as local election voting rights and says the European Parliament will continue to closely monitor how EU states implement the Withdrawal Agreement with regard to British people’s rights. The full text of the resolution can be found here.

Brussels insiders say Mr Verhofstadt is expected shortly to be appointed as head of a new EU body called the Conference on the Future of Europe.

This follows a private meeting of senior MEPs yesterday.

First proposed by French President Emmanuel Macron, this new body is going to be tasked with looking at ways in which the EU could be reshaped in coming years, including if necessary changes to treaty law.

That may bode well for the idea of an ‘associate EU citizenship’ for those Britons who still feel attached to the EU, an idea which Mr Verhofstadt continues to champion.

20 hours ago
4
Will Britons need a health pass to visit France from June 9?