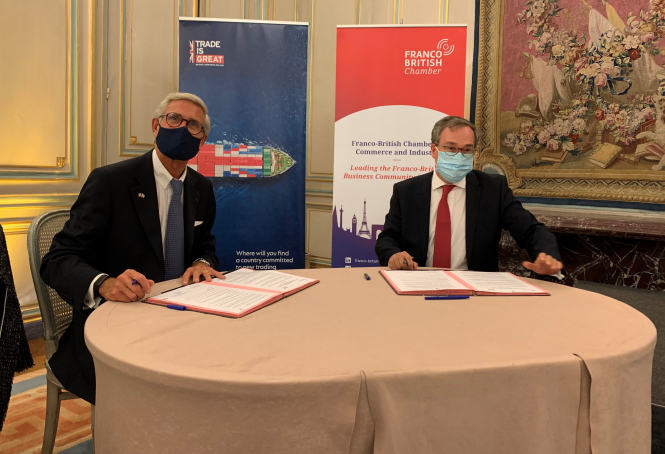 The Franco-British Chamber of Commerce and Industry (FBCCI) hailed the agreement as ‘historic’, saying it will allow businesses to better join forces to face up to a “unique economic and health crisis”.

Its president, Thierry Drilhon, told The Connexion that firms still face uncertainty with the UK and EU struggling to agree on a ‘future relationship’ deal with just weeks to go, however, he said, “failure is not an option” and firms are preparing to go on doing business next year whether the deal is signed or not.

The new ‘Joint Action Plan’ includes regular technical roundtables on practical details of the UK’s new relationship with the EU in areas such as market access and border and customs controls (for the time being these will be mostly online events). Webinars for small businesses on practicalities of doing business in France are also planned.

Three briefing breakfasts a year with the British Ambassador will help to make sure the chamber is up to date on international and bilateral issues, says the FBCCI.

The plan was signed between Mr Drilhon and the British Ambassador Lord Llewellyn at a rentrée reception for their members held near the embassy in Paris.

“This agreement is very important in light of the overall geopolitical and economic situation,” said Mr Drilhon.

“The government and EU are still in talks and entering what could be a final phase – and this is an opportunity for businesses to join forces on both sides of the Channel.

“It is a question of what trading relationship we want to shape in the next decade.”

He added: “Our relationship with the British Embassy and Department for International Trade [DIT] has always been close, but this new partnership is a formalisation of what we are going to do jointly to the benefit of businesses over the next ten years.

“I am a business executive myself and a very pragmatic guy so this is not about vague long-term plans.”

In some cases the plan (read the detail of its contents here) is a formal commitment to continue activities which were already started during the Covid-19 confinement period.

“In the next few months, and especially from January 1, companies will require technical information relating to taxes, logistics, transportation, insurance…. They will be asking ‘how can I continue to do business?’,” Mr Drilhon said.

“UK-France trading relations represented in 2019 nearly €100billion and we need to continue to make this flow happen.

“So, our technical roundtables will be extremely important. It will be organised over Zoom or physically. Over the confinement period we also developed very pragmatic webinars, at least twice a week, and we held breakfast briefings chaired by the Ambassador and myself, over Zoom.

“Imagine we hold a roundtable on transportation and logistics: there will be many questions, what will happen with customs? What happens if I want to send goods from one country to the other?

“Usually we will have experts, from the DIT or other UK government ministries, and CEOs and chairmen from big logistics companies such as UPS. And they share their data and information. It’s very concrete.”

Another part of the plan is the work of the Cross-Channel Institute, Mr Drilhon said.

Launched last year, this is a think-tank created by the chamber and the DIT with global accountants PricewaterhouseCoopers to develop the economic relationship between the UK and France.

“It contributes in different ways, for example once a year it produces a barometer of key data on the trading relationship. All the information is on our website, relating to size of transaction, which sector, in which port, how many people are involved etc. It’s unique in the world.”

Asked how businesses are currently coping, Mr Drilhon said: “They are a bit fed up of the uncertainty. Politicians and those who will decide on a general framework [future relationship] agreement should stop taking our businesses hostage. We need clarity one way or the other.

“But failure is not an option for business and if politicians are not able to find an agreement then businesses will join forces and continue to transact.

“Businesses of all sizes are ready for January 1. We have to move forward and can’t wait for what will be decided."

Solutions for specific sectors will rely on many specialised deals

Mr Drilhon added that the deal under negotiation is about an overall framework but "what will be key is what will happen with 682 multinational or binational treaties and agreements, industry by industry"

He said: “If I’m in the luxury goods industry, I am interested in what will happen with this sector. If I’m a fisherman I want to know what will happen for opportunities for me to continue to fish in specific parts of the sea.

“So the Devil is in the detail and it is these specific agreements that need to be rethought and redesigned for the future.”

He said one area where there had been progress was an agreement for the City of London to continue clearing euro derivatives for 18 months, a sector which deals with €750billion a year. There had also been discussions on the UK continuing to participate in the Erasmus+ university exchange programme for two years [an EU Commission spokesman said, however this has not been agreed yet].

“Some areas are so critical a solution just needs to be found,” he said.

“He added: I’m not a politician. I just know that whatever happens, business will continue on January 1 in one way or another.

“People will continue to travel across the Channel – in a typical year some 36million of them, and Getlink, for example [the Channel Tunnel operators] say they’re prepared.

“I’ve spoken to the guy in charge of French customs, and he said whatever the situation is, we will be ready on January 1. We were already prepared 18 months ago. It’s about anticipating the situation.

“To give one example, Getlink have spent €60million on new infrastructure and digitalisation of forms etc.”

What is the FBCCI?

The Franco-British Chamber of Commerce and Industry was created in 1873 and is the oldest international chamber of commerce in Europe.

Its members are firms of all sizes, with a Franco-British link: firms that do cross-Channel trade, French firms setting up subsidiaries in the UK and vice versa, Britons setting up or running businesses in France etc. It has some 700 members but an ‘ecosystem’ of around 2,000 firms in total with which it works. Membership fees depend on size of business and start from €500/year. Advantages include access to member-only events and being recommended to potential clients seeking help in their area of expertise.

Access to online webinars and technical roundtables will be mostly member-only but where this is the case other businesspeople will be able to take part in one event as a free trial (payment on a one-off basis will also be possible for individual events). However some events ‘open to all’ are organised. See the Events section at  the chamber’s website for upcoming items.

Anyone may also access free information in the ‘Brexit Hub’ and ‘Cross-Channel Institute’ sections of its site at francobritishchamber.com. Covid-19 information is also shared under ‘News’.