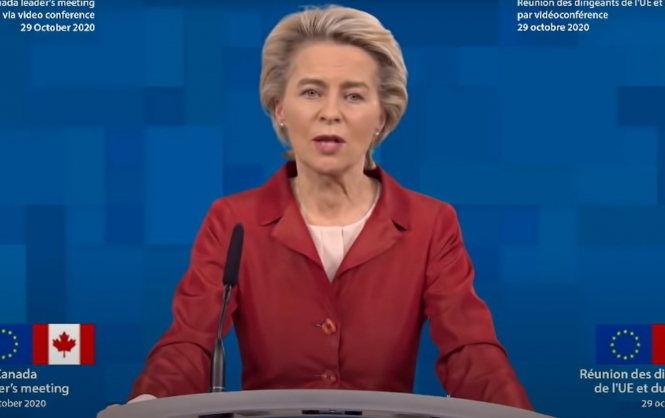 After treaty talks briefly broke down amid threats from the UK to walk away in the middle of this month, they restarted last week in London and now in Brussels after the UK accepted the EU had indicated willingness to find new compromises.

Commission president Ursula Von der Leyen said yesterday she is now in “hourly contact” with EU negotiator Michel Barnier “because the negotiations have intensified over the last week”.

She added: “We are in a critical phase now and it’s boiling down to the two topics that are the most important – the level playing field and the fisheries.

“However there are 11 other fields that have to be negotiated until the very end.

“We are making good progress but we would like to see more on those two issues.

“We are going in-depth into how to construct a system that is fair for both sides for a level playing field, which is a sine qua non for the UK to have quota and tariff-free access to the single market.

“That includes a dispute resolution mechanism with clear rules on both sides, which will be a crucial area in the next days.”

Agreement on a deal in the first half of November at the latest is said to be essential if a treaty is to be ratified and ready to apply by January 1, 2021 when the UK will leave the EU’s single market at the end of the Brexit transition period.

Even with a deal there will still be many changes, including an end to free movement for British people to France and new checks on goods crossing the Channel, however it would allow for a more orderly exit and more certainty across a wide range of areas.

Areas where the EU and UK are said to have progressed well include social security coordination, which includes matters such as ensuring that future British expatriates may continue to have uprated UK state pensions in France, or that healthcare arrangements (ie. the Ehic system) could continue for British visitors to France. However without an overarching deal on matters such as trade and fishing rights such elements could also fall away.

In November’s edition of The Connexion, cross-bench peer and former British ambassador to France, Lord Ricketts, says he believes a deal to be close though it will still mean a fairly ‘hard’ form of Brexit.