I want to be your voice in European Parliament 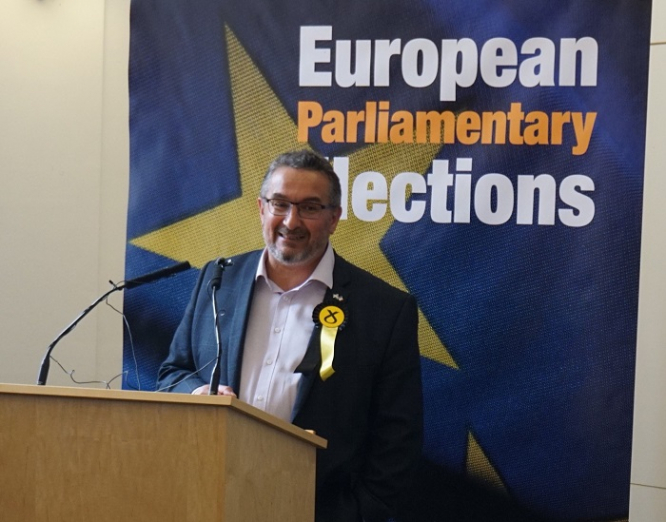 New MEP Christian Allard said: “As soon as I heard there was a possibility of Britain taking part in the European elections, I contacted my party to put my name forward.

“I wanted to be a voice for the three million other EU nationals in the UK and 1.2million Britons abroad in the EU. I’m one of them, I’m a French citizen 100%.

“I’ve been asked to apply for ‘settled status’, but I won’t.

“I came to the UK 35 years ago for work and got married and had three children.

“Brexit was not supposed to happen and certainly not this way. I came to Britain by right.

“Asking me to apply to stay in my home is wrong and it’s the same for Britons across the EU.”

He added: “I and my two SNP colleagues aim to influence people around us to make sure we don’t exit at all.

“The welcome at the parliament has been incredible: everybody understands the situation and how we want to remain.”

He said one of his colleagues questioned the new EU Commission President Ursula von der Leyen, whom they have helped to elect.

“She said she was a Remainer and would do anything she could. She is very happy to help us have an extension if needed. And she said she was a fan of Nicola Sturgeon. We were delighted to vote for her.”

An extension is needed, he said. “Then the prime minister must realise the Brexit bus has stalled and the only way out of a dead end is to revoke article 50 or hold a referendum on the deal.

“A no-deal would be a disaster and any prime minister who tried to go for it would pay the price by losing the premiership.”

Mr Allard supports ring-fencing of the citizens’ rights section of the withdrawal agreement.

He will ask the UK to allow EU citizens to stay with a simple registration formality and not an application for authorisation.

He hopes if Britain shows good faith that will ensure other countries look after Britons.

He said it is difficult for the other countries, not knowing if the UK will leave or not, and with or without a deal.

“They have spent a lot preparing already,” he said. “It’s up to the UK to show how we must not make people pay for the stupid idea that a Brexit could be done.”

The SNP says if Brexit happens this justifies another independence referendum. In Scotland the majority voted to remain.

“It’s not what we want but the Scottish Parliament is putting things in place in case.

“I’m sure the new president understands if we are put in that impossible situation, Scotland has no choice.”

He hopes Scotland could remain in the EU, perhaps with a transition period.

“I’m even starting to hear politicians from other parts of the UK, who wanted Scotland to remain in the union in 2014, saying ‘if we leave, please just go, and save yourselves’.”