MEPs speak of love and hate in emotional Brexit debate 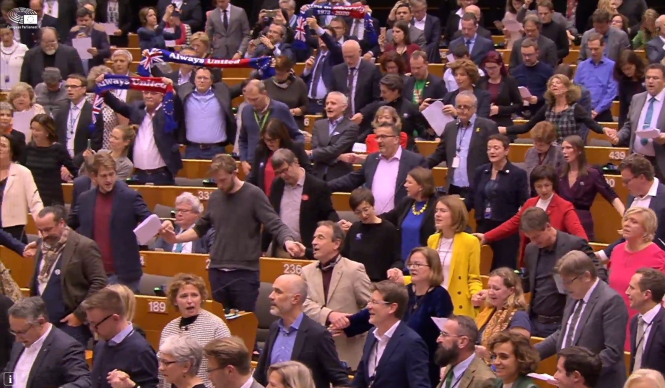 MEPs also spoke of the importance of expatriates’ rights in the time ahead, saying they “will not let [Britons in the EU] down”.

Many MEPs spoke of hopes that the UK’s departure would be an au revoir, not an adieu (definitive goodbye) in the debate which culminated in the EU Withdrawal Agreement being adopted with a large majority and a rousing rendition of Auld Lang Syne.

The Parliament’s Brexit coordinator Guy Verhofstadt opened by saying his British colleagues had “brought wit, charm, intelligence – some of them – and sometimes also stubbornness… I can only say we will miss you in the coming years.”

“It is sad to see a great nation leaving us, that has given so much, culturally, economically, politically… even its own blood in two world wars,” he said. “It’s sad to see a country leaving that’s liberated us, twice gave its blood to liberate Europe”.

He said some say Brexit was related to sovereignty but he said the real way to regain sovereignty in today’s world, with powers like China, India and the US and transnational problems like climate change was through the EU.

Others said it was about migration, he said. But migrants in Britain were tax-paying EU citizens in hospitals, universities, building sites, contributing to British society.

Some have said the EU did not concede enough to David Cameron.

However he said it was the opposite – the problems started much earlier when the EU had allowed exceptions, opt-outs and rebates, which led to the EU being less united and effective with some countries seeking only to get what they could out of it economically and avoid obligations.

The real lesson was to deeply reform the union, without exceptions and special treatment, and without veto rights or rules requiring certain votes to be taken in unanimity.

Mr Verhofstadt said he had recently received hundreds of emails from Britons saying they desperately want to stay or return, but he did not know how to respond.

“It’s not in our capacity to decide that. But we can make sure that the union that they will return to will be another one – effective and more democratic,” he said.

European Commission president Ursula von der Leyen paid tribute to Britons who “contributed so much to almost half a century of British EU membership” – thousands of British civil servants, British MEPs, and people like Commissioner Arthur Cockfield, “who was known as the father of our single market”, or Roy Jenkins, president of the European Commisison, who “did so much to pave the way for our single currency.”

They would always “stay part of our European family”, she said.

She concluded quoting British writer George Eliot: “Only in the agony of parting do we look into the depth of love. We will always love you and we will never be far.”

German MEP Manfred Weber [EEP, centre-right] called Brexit a “huge mistake”, saying Britain had “done so much for peace and prosperity in Europe”, but he said the WA was good and gave certainty.

The UK had decided to limit the transition period, he said, but the EU would not be put under pressure. It was ready for intensive talks but wanted the best agreement, not the quickest one.

“If you are part of a union you can enjoy the advantages, but if you leave you lose them. It’s not punishment, it’s simply the outcome of the decision of the British voters,” he said.

“There will be no cherry-picking, no Singapore next to us. We will only grant access to our market if you respect our rules.”

He said the EU must learn from Brexit to see how it can better improve the daily lives of Europe’s citizens – “I hope our work in the next years will make Europe so strong and attractive that your children and grandchildren will want to be part of the EU again,” he said.

The leader of the Socialists and Democrats, Iratxe Garcia Perez, said they were “devastated to see the UK go”.

They respected the decision of the UK people but she also “pointed the finger” at those who used “a populist campaign” and “fake news” to take advantage of “disenchantment after years of austerity”.

Former French Europe Minister Nathalie Loiseau [Renew Europe, centrists] said: “We will miss you, the EU will not be the same without you. My deep feeling is that there is no good Brexit. Even if I support the WA, I am still convinced we are better off together than we will be apart.”

She added: “To British citizens in the EU and Europeans in the UK, I want to assure them that we will not let you down. This parliament is the voice of the citizens and we will make sure citizens’ rights are fully respected.”

Addressing “the Brexiteers”, she said: “You will have no one to blame for the future of your country, especially not Brussels. You are in change, but if you think next phase is the weakening of the EU we will prove you dead wrong. We will renew Europe and make it better and stronger. Brexit is a sad and exceptional moment.”

Nigel Farage [EFDD, populist and Eurosceptic] however said the British had never been satisfied with the EU project, which he said was meant to be about trade, not “political union, flags, anthems, presidents…”.

“This Friday is the point of no return. We are never coming back. The rest is detail,” he said.

He said he opposed the European project – we do not need so many institutions in order to have friendship and cooperation.

“We love Europe, we just hate the EU,” he said.

Mr Farage and his colleagues took out small Union Flags and waved them – not allowed under the Parliament’s rules – and left.

British Lib Dem Bill Newton-Dunn said Mr Farage had “spoken an untruth” and the project had never been about free trade only – it was clear even in Britain’s 1975 EU referendum campaign, he said.

“They’ve been misleading the British people all the way along, and it’s a disgrace.”

British Green MEP Molly Scott Cato spoke tearfully of how the UK must show compassion for EU citizens in the UK and revitalise the European friendship groups and twinning associations that had existed before the UK joined.

“Now not time to campaign to rejoin but we must keep it alive,” she said. “One day I will be back in this chamber celebrating our return to the heart of Europe.”

British Lib Dem Luisa Porrit called Brexit a “regressive, reckless, malicious right-wing project”, adding: “The only people who are celebrating it outside the UK are those who wish to weaken us all.”

Finnish populist MEP Laura Huhtasaari however called Friday January 31 a “glorious day”, and “the victory of the common people against multi-national corporations, special interests and other elites”. Britain would “triumph outside the EU” and had “begun a shining movement that cannot be stopped”, she said.