Stock up on your Marmite 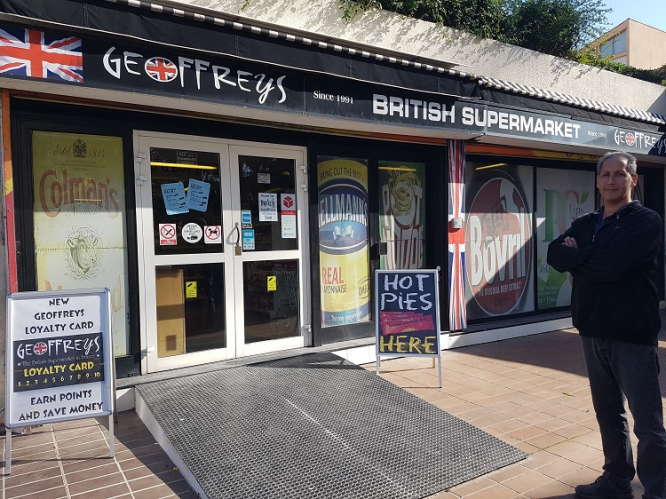 French shops will still be able to stock UK food but, depending on the future relationship talks, are likely to face extra costs due to import taxes, border inspections and additional VAT formalities.

Foods would also need to be certified at origin from an approved business in the UK.

Meat, meat products – those that do not look like meat but are derived from it – and milk and dairy products would also not be allowed to be brought in personal luggage from the UK as is the general case with non-EU countries now.

Unless other arrangements are agreed, posting food from the UK would also be banned.

Chris Brand, a director of Geoffrey’s of London, which has sold UK food in Antibes on the Riviera for 30 years and also has a wholesale side supplying hotels, supermarkets and restaurants, said they are waiting and hoping for a deal that avoids the worst-case scenarios.

They also hope that agreement can be reached quickly on trade, so that they are prepared – as opposed to only finding out the new arrangements right at the end of the transition period.

He said: “We’re bracing ourselves for more complicated formalities for the customs and for shipments coming from the UK to Europe and then eventually more taxation, which could be up to 20% of extra tax on imports.

“But before the transition ends we hope they realise it’s going to have enormous consequences on both exports and imports – if there’s 20% coming out of the UK there’ll probably be 20% going in as well, which is enormous for any business– and maybe things will change, but at the moment we’re still as much in the dark as we were a year ago.”

He added: “Of course the UK wants out, but we need to see what Europe will accept. The UK can’t just say they’ll come out with what suits them and not what doesn’t suit them.

“But no one seems to know what’s happening or who’s making the decisions, and there’s nothing concrete in place, so we have to carry on with business as usual. We have a trailer of goods coming down every week.”

He added: “A solution will have to be found and if anyone has any sense, they’ll make it as easy as possible.

“No-deal would have been absolutely catastrophic, but at least they are negotiating now.

“Hopefully they will come to an agreement, if not they are going to end up crippling a lot of businesses and prices are going to go through the roof. I can’t see what that will achieve.”

Mr Brand said that for the last year he has been increasing stocks each time me bought an order from the UK.

“It was just in case the frontiers did get closed so as not to have supplies stuck in the ports waiting for clearance. It all means added complications for us.”

A couple who ran an English deli in Normandy for 27 years have given up UK food in favour of products from Ireland.

The swap was sparked by Brexit concerns – and has worked out for the best, says Sally Offord, of La Violette.

As well as selling food items,  Mrs Offord is a pâtissière and specialises in gluten-free and vegan cakes made with flowers and vegetables from her biodynamic garden.

When Brexit was announced, many suppliers told her they would not be able to export because they feared hikes in custom taxes and extra paperwork, so the couple began to explore other options.

She said: “I visited Irish cheesemakers, farmers and artisans and launched a range of excellent products including kefir and organic pressed fruit juices, some fabulous cheeses including organic seaweed and Cahill’s Irish whiskey and Guinness porter cheeses.

“I have changed our banking to Ireland too, so I can keep transactions in euros with no worries about exchange rates. The last three years have been challenging, but with 95% of the clientele being French, I now wish I’d changed direction a long time ago as the Celtic link is so strong.”

She added: “I find producers are better organised in Ireland.

“They set up group deliveries. I order on Thursday and the products arrive through Cherbourg on Monday.

“UK producers would not do that. We had to cross the Channel to get products. It means I can keep costs down and Brexit does not mean higher prices for customers.

“I have also changed my recipes to Irish ones, with great success. I make bio Irish soda bread and Guinness bread.”