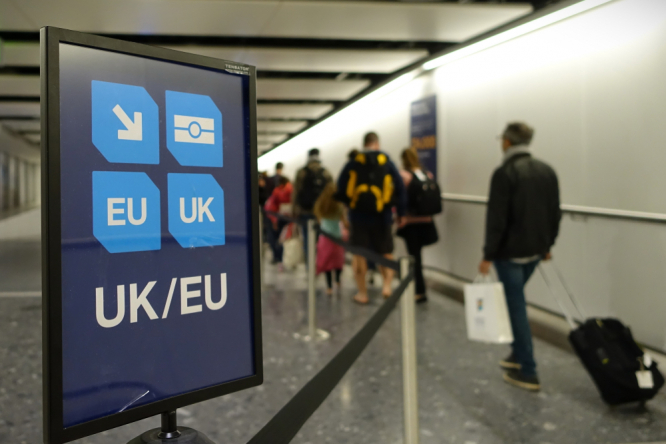 The UK left the EU on January 1, 2021, meaning British visitors to France must now respect the so-called 90/180-day rule. This includes second-home owners. Other nationalities, such as Americans, Australians and Canadians were already concerned by this.

How does the 90/180-day rule impact entry to France for Britons and other 'third country' citizens?

‘Third-country’ (non-EU/EEA/Swiss) citizens of nationalities not subject to a requirement for short-term Schengen visas are free to come to France without visa formalities but are subject to the rule of staying no more than 90 days in any 180-day period.

Their passports will be stamped with the date of entry and exit so border officials can check they do not overstay.

So as to have passports stamped, they have to join the ‘all passports’ lanes at EU airports, not fast EU-only automatic gates, and could, in theory, be asked for additional paperwork.

Britons are advised by the UK government to ensure that their passports have at least six months left to run on them and they should note that any ‘extra’ time obtained by renewing the passport early may not count.

The general French rule is that non-EU visitors' passports must have been issued less than 10 years ago and be valid to a date at least three months after the intended departure date from France.

Paperwork that border officials may ask for from third-country nationals can include:

The Interior Ministry confirmed that the latter is not essential if the visitor has, if asked for it, proof of funds for their stay of €120/day. People staying in their own second homes should bring proof of ownership, such as recent electricity or water bills, or a taxe foncière bill.

See here for a full list of these documents.

British residents of France returning home will, to avoid passport stamps and other checks, have to show evidence of being residents, such as a new Brexit Withdrawal Agreement residency card or an attestation of having applied for one, or an EU citizen residency card or otherwise some other document such as a recent French utility bill.

Despite calls from some British second-home owners and others such as those who visit in campervans, to extend the 90/180 rule for Britons to allow six-month holidays, this was not part of the Brexit future relationship negotiation.

It would however have been difficult for the EU to have agreed to this as the 90/180-day rule is standard for all people entering from outside Europe’s Schengen area.

Campaigners had argued for it on the basis that EU citizens will be able to spend up to six months at a time in the UK, under its standard domestic rules for citizens from countries where a visitor visa is not required.

What exactly does the rule relate to?

The 90/180-day rule relates to entry and exit from the entire Schengen area. This refers to the whole of the EU apart from Bulgaria, Croatia, Cyprus, Romania and Ireland. Also included are Iceland, Liechtenstein, Norway and Switzerland.

In future, but not before 2022, the EU plans a system of automated checks on entry and exit of non-EU citizens to the Schengen area, replacing the need for passport stamps.

The EU states that this issue of checking on entry to the area by third-country nationals is very important because of the fact there are no internal border checks inside the area, such as when travelling from France to Spain.

This concerns those people entering the area as visitors from third countries whose nationals are exempt from visitor visas (nationals of certain countries may not even visit France without a visa). The EU and UK reciprocally agreed on the fact that visitor visas are not required for Britons.

The EU’s latest definition is that it should be best understood not by looking forward in time from the point of entry, but rather by looking back. It should therefore technically be imagined as a ‘moving’ period of 180-days as opposed to a fixed period starting on the first day you enter the area.

In practice, this means that at any one time when you are in the Schengen area, you must not have spent more than 90 out of the last 180-days in the area.

The entry date is the first day on which you spend any time in the area, the exit day is the last day you are in the area.

One effect of this is that if you are ever away for a full period of 90 days (three months) then you will have accrued the right to another stay of up to 90 days.

A short-stay calculator tool may be used to help with this.

It has two options: ‘control’ which is to calculate the length of previous or ongoing stays and check you are complying with the 90/180-day rule; ‘planning’ is to check the maximum length of stay which may be allowed if you enter the Schengen area on a certain day in the future.

Are there any penalties if you overstay?

An Interior Ministry spokesman previously told The Connexion that there is currently no specific penalty in the case of a person exempt from a short-stay Schengen visa overstaying the 90 days.

However he said should you be asked to show your papers for some reason, for example, while crossing an internal Schengen border, you could be subject to an order to leave the zone in 30 days if found to have overstayed.

He said there would be no other penalty as long as you left within this time – however when you leave France the border officials may take note of the fact you overstayed which could remain on your file and potentially be used as justification for refusing you if you were later to apply for a carte de séjour to live in France.

He said in the case of people of nationalities subject to short-term Schengen visas there can in theory be severe penalties for overstaying, however, most commonly there is a fine plus an order to leave in 30 days.

Is it possible to stay for longer than 90 days?

The only option for staying longer than 90 days is to apply for a visa de long séjour. There is a ‘temporary’ visa issued for four to six months which is not renewable and you must leave when it expires. There is another called visa de long séjour valant titre de séjour (VLS-TS) which lasts a year.

You would need to apply on france-visas.gouv.fr and a fee is payable (Americans coming to France for more than three months pay €99, for example).

You will also have to attend a French consular office in your home country, taking documents showing you can support yourself during the trip and you have health insurance and somewhere to stay.

You could later either visit again to collect the visa or pay for it to be delivered to you.

The French consular service in London told The Connexion it would be possible for Britons owning French holiday homes to apply for the VLS-TS which would allow for more ‘flexibility’ than the short-term visa.

The service said it can be renewed in a French prefecture as opposed to the temporary visas which would require a new application to the consulate if a further period was required.

French government websites however state that extending the VLS-TS means applying for a carte de séjour residency card from the local prefecture according to your status, whether employee, self-employed person with a serious business plan, ‘inactive’ person etc.

This raises the question as to whether this is feasible without the intention to make France your habitual place of residency, with the usual consequences including taxation in France.

We have asked the consular service for clarification on this point.

Any time spent in France on a long-stay visa and/or carte de séjour does not count afterwards as part of the 90/180-day rule.

Brexit: When do I have to renew my passport?

What to do if you are among 1.4 million hit by Paris Covid data theft
20 September 2021
More from Brexit
More from Connexion
Get news, views and information from France
Join the newsletter
Subscribe to The Connexion