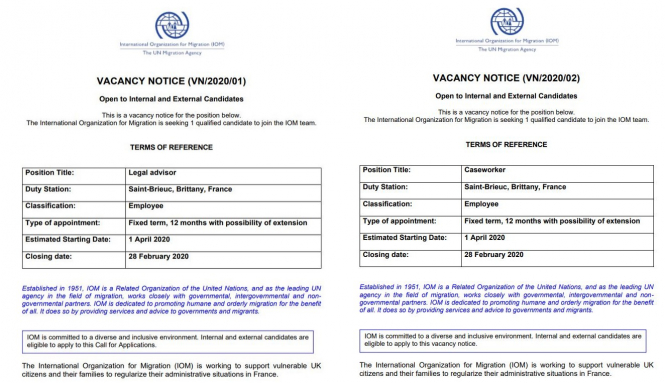 Connexion spoke Geneva-based International Organization for Migration, known for helping migrants and refugees living in poor conditions or in war zones, this morning. It confirmed that it is looking at the idea but said that no decision has yet been made.

It comes after the publication of two recruitment ads stating that “The International Organisation for Migration is working to support vulnerable UK citizens and their families to regularise their administrative situations in France”, and a media report of the UN stepping in.

“Nothing is set in stone” said communications officer Safa Msehli but the agency has been thinking about a plan to help British people struggling with French administration because of Brexit.

The International Organisation for Migration, which leads the United Nations Network on Migration, had published two job offers on their website for a legal advisor and a caseworker in Brittany, France.

If the plan goes ahead, the estimated starting date is April 2020, as stated on the ads.

We will give more information if this is officially confirmed.

The plan follows the announcement last year by the UK's Foreign and Commonwealth Office that it would provide funds to selected organisations that can help Britons living in the EU with Brexit-related formalities. The list of bodies whose bids have been accepted has yet to be announced.