Trump praises Johnson and hits out at EU 'shackles' 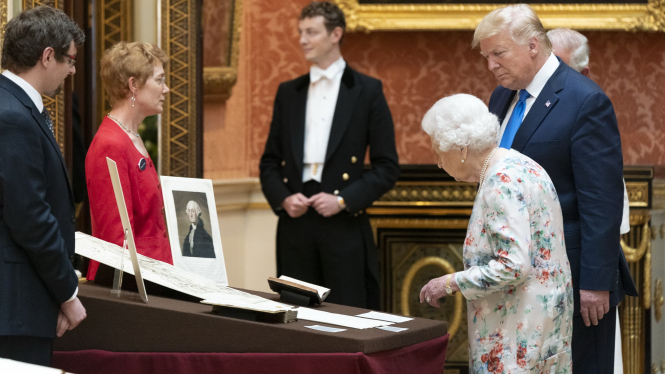 He has also praised Conservative leadership candidate Boris Johnson, who yesterday launched his official campaign with a video in which he said “we’re out, deal or no deal”.

Mr Trump, known for his outspoken tweets, sent out the comments just before a banquet at Buckingham Palace last night at which he toasted “the eternal friendship of our people” and stated that the bond between the countries had been “forever sealed” when “the brave sons of the United Kingdom and the United States defeated the Nazi regime and liberated millions from tyranny”.

It followed an interview with the Sunday Times just before his arrival in the UK in which he said “if you don’t get the deal you want… then you should walk away”, adding that if he were in the UK’s position he “wouldn’t pay” the €50million withdrawal settlement.

In the interview Mr Trump called Brexit Party leader Nigel Farage as “an asset to your country”, suggesting the UK invite him to join negotiations with Brussels, and called former Foreign Secretary Boris Johnson, in the running to be the next prime minister, “a very good guy, a very talented person” who “would be excellent” in the role.

Anti-Brexit campaigners Led By Donkeys responded yesterday by projecting onto Big Ben images from a 2015 interview in which Mr Johnson, then mayor of London, attacked Mr Trump’s policy of banning immigration from certain Muslim countries and said he had showed “quite stupefying ignorance that makes him frankly unfit to hold the office of president of the United States” with remarks about “no-go areas” in the British capital.

Mr Johnson was last week issued with a summons to court in a private crowd-funded prosecution which alleges misconduct in public office over claims in the Leave campaign that the UK “sends £350million a week” to the EU. He has now appealed against the summons.

Question marks have been raised as to how many concessions the UK might have to make in a future post-Brexit trade deal after the American ambassador to the UK told BBC interviewer Andrew Marr on Sunday “the entire economy” would be “on the table” in talks over a deal, including the NHS.