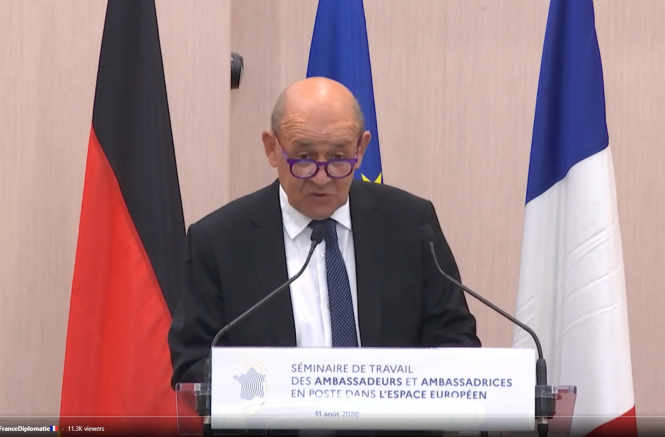 Jean-Yves le Drian said this was due to “the intransigent and frankly unrealistic attitude of the UK”.

Speaking to French ambassadors to EU countries at a European seminar, he added: “When it comes to Brexit, we have always showed unity; we have proved wrong those who said they saw signs of a generalised implosion of Europe.”

He said he had complete confidence in German Foreign Affairs Minister Heiko Mass [Germany currently has the presidency of the Council of the European Union] to ensure that this unity continued. Mr Mass was present at the seminar.

In a video of his speech posted on social media by his ministry Mr Le Drian adds (20 minutes in) that: “It is by remaining united that we will be able to continue to [inaudible due to poor recording]… an overall agreement, and not one that is chopped up into sectors like salami.

“An agreement that is balanced, covering a broad range of subjects including trade, fishing, transport and security – and which preserves the principles and the interests of the Union, in particular ensuring the conditions for fair competition so as to avoid ‘dumping’ [referring to ‘unfair’ cost-cutting by holding firms to lower standards on worker rights, environmental protection etc]. “

The seminar related to early preparations for France to take over the presidency of the EU Council in the first part of 2022.