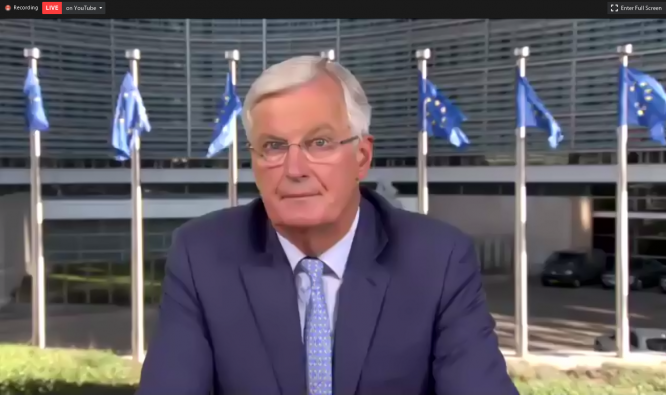 “We are now less than four full months away from January 1, 2021, the date chosen by the UK itself for its economic and commercial Brexit after the political Brexit in January this year, because the UK refused any extension of the transition period. So we have no more time to lose,” Michel Barnier said.

He said he is "worried and disappointed" because the UK has "not engaged constructively" however he holds out hopes of a breakthrough at the eighth round of negotiations in London next week.

A final agreement must be ready at the end of October in order for it to be ratified in time for the new partnership to be in place by January 1, Mr Barnier said. "This is a legal and democratic necessity and everybody must be realistic about this strict deadline.”

Speaking in a webinar run by the Institute of International and European Affairs (IIEA) in Dublin Mr Barnier said that whatever happens, the ‘economic’ Brexit next year will have “many negative consequences”, but “if we all act responsibly, we can contain some of them”.

“We want a close partnership with the UK, providing the conditions are right. This is in everybody’s interest.”

However he said the UK had shown no willingness to compromise on areas that are vital to the EU, such as fair competition, dispute resolution mechanisms and fishing rights, all of which he said had been listed in the Political Declaration to which the UK signed up last year.

Recent claims in a major UK daily that the UK had made a new proposal on fisheries that the EU had refused to consider were "ridiculous" and based on a faulty source, he said. The EU had however proposed several solutions but the UK "shunned our offers", he said.

“On all these issues the UK side continues to disappoint. We know its argument – it wants a clean break… yet the truth is British negotiators are still seeking continuity in many areas - on transport and checks on goods, for example, as well as police and judicial cooperation.

“The UK government is still looking to keep the benefits of the EU and the single market without the obligations. It often says it would be in the EU’s interest to grant it a special status in these areas, but is it really the EU’s long-term economic interest?”.

For example he said UK demands on goods would allow it to become an “assembly hub”, with the right to buy goods around the world, make minor modifications and then export them to the EU as British goods, tariff and quota-free.

Its demands on transport would allow British truckers to drive in the EU without complying with the same working conditions as their EU equivalent, and on air transport, British airlines would be permitted to operate inside the EU without respecting the same environmental standards.

It also demands the right to trade energy easily, but without committing its producers to rules on CO2 emission, or state aid controls. The UK would be free to subsidise both polluting industries as well as greener ones, he said.

“How can we conclude a long-term economic partnership agreement between sovereign partners without knowing what system of state aid and subsidies the UK will put in place, and with no assurances that the UK will not use its new regulatory autonomy to distort competition with us?”

The UK had also given no reassurance on its future sanitary regulations over the food it will export. It was also now looking to backtrack on promises made in the Withdrawal Agreement to respect existing geographical indications [labels such as AOC and IGP that protect traditional names], he said.

“These are not technocratic details. These are essentials. At stake are tens of thousands of European jobs and livelihoods, our health, safety and wellbeing, our environment and climate, our fundamental rights.”

Mr Barnier said another key aim of the EU, in parallel, this year, is to ensure the full and effective implementation of the Withdrawal Agreement deal by the end of the year, “in particular as regards citizens’ rights and the protocol for Northern Ireland and Ireland”.

In recent months he said the UK had started to make progress with the border arrangements.“This is encouraging but important questions remain open.” Many practical preparations are also required, he said.

The webinar host did not submit to Mr Barnier questions from The Connexion as to what would happen to other elements of the WA such as expatriates’ rights, should this fail to be fully in place.

However Mr Barnier stated that the EU would be “extremely vigilant when it comes to ensuring the full respect of citizens’ rights both in the UK and in the 27 member states”.

Mr Barnier also did not address our question about the EU and UK’s reported clashes over social security cooperation, a key area for Britons who live in France or have French holiday homes, which includes the Ehic health card, pension uprating, the S1 form or exportability of disability benefits.

Even with a deal in place, there will be “big changes on January 1, 2021,” Mr Barnier said. “The UK will leave the single market and customs union and all EU policies and all our international agreements – this is its choice, not ours”.

This means for example:

Mr Barnier said: "These are the clear Brexit consequences. No trade agreement, however ambitious, can change this. Businesses, public administrations and citizens must urgently get ready for these changes."

However, he said there would be "huge differences" between a deal and no deal.

“Sometimes I hear people in the UK talking about the opportunities of a no deal. Good luck to them!

“But frankly there is no reason to underestimate the consequences for many people and many sectors. It’s the reason why we’re working for a deal and even though it’s very difficult because of the British positions, I still think it is possible.”

The differences would include quotas and customs tariffs on goods, in addition to the obligatory checks and there would be “many problems and frictions,” he said.

He added: "As we near the finish line I still have hope that despite current tensions, our common history with the UK and shared values will prevail.

“We will do everything in our power to reach an agreement until the very end, but we will never sacrifice the EU’s long-term economic and political interests for the sole benefit of the UK.

“If they don’t move, the UK is taking the risk of no deal.”