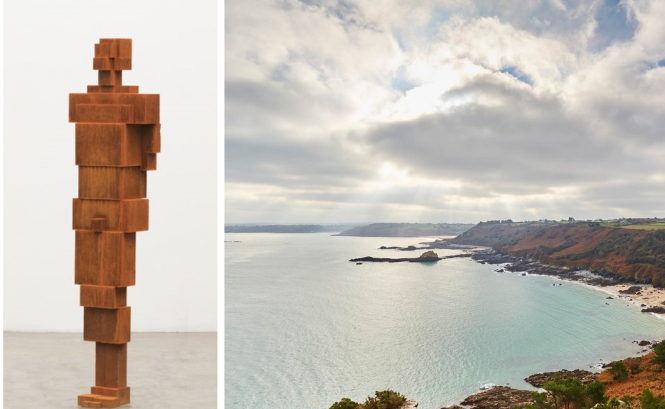 Sir Antony, who is best-known in Britain for his Angel of the North statue near Gateshead in Tyne and Wear, and his “Another Place” figures at Crosby beach in Southport near Liverpool, revealed the plans in an interview on the arts podcast These Three this week.

President Emmanuel Macron is said to be supportive of the project, which was first imagined after Sir Antony was invited to France by Philippe Bélaval, president of national heritage group le Centre des Monuments Nationaux (CMN).

It was during this visit in 2017, which included a trip to Barnenez in Finistère (Brittany), that the sculptor became inspired to create the project, he said.

Discussions are still underway with the local community, and authorities are yet to formally approve the plans, but Sir Antony hopes that the humanoid iron sculptures will sit on an archipelago of small islands in the Baie de Morlaix in Brittany. The final piece will stand up to seven kilometres out to sea, the sculptor said.

Sir Antony is set to travel to Brittany imminently, to meet marine engineers, and consult with harbour authorities on tide levels in the area.

In an interview with newspaper The Observer, Sir Antony explained that the sculptures would be created with up to 30 slabs of iron, balanced in a humanoid shape on top of each other - similar to some of his previous work.

He said: “They are sort of massive houses of cards, but made out of blocks that do actually cohere. They are an attempt to say something about the human condition – that we are all provisional. We stand up, but we are always in danger of falling over.”

He added: “These sculptures should never be completely underwater, unlike on Crosby beach. They should always be adequately visible and adequately attached to a rock or to an island [and] part of a known shipping hazard. But it may not happen. We may not get all the necessary permissions.”

The work would also be a way to highlight the Celtic links between Britain and northern Europe, and honour the community and lives of present-day Brittany residents, as well as the farmers who lived and worked on the land thousands of years ago.

The area is home to a prehistoric cairn (a man-made stone hill), that has been dated to 4,500 BC, and contains 11 ancient burial chambers.

Sir Antony has also intended the work to be a statement on Brexit, to which he is outspokenly opposed. He has called Brexit “a stupid moment of collective fibrillation”.

He said: “We belong to Europe, geologically as much as anything else. We were only separated five thousand years ago. The whole idea that somehow we can go it alone by making greater relationships with the former Commonwealth and with our friends and cousins in America is just ridiculous.”

Sir Antony has also said that he believes the EU was an attempt to heal Europe from the divisions of World War One and Two.

He said: “How do you understand yourself other than by your relations with your nearest neighbours? We all know the EU is inefficient, but most human institutions are inefficient and that doesn’t mean we should not be part of their improvement.

“I sincerely hope this moment of utter instability and lack of movement just disappears and we get on with making a sounder, safer, more just world. Because without the help of our neighbours we can’t do it.”