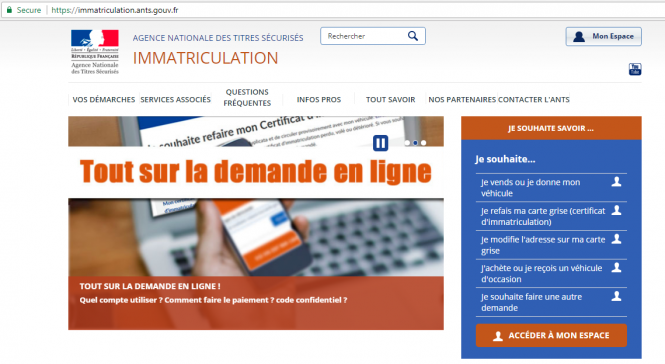 Motorists are taking the State to court over delays in processing cartes grises vehicle registration documents.

An estimated 450,000 car registration documents remain stuck in processing by the new online carte grise system. As reported, the Conseil national des professionnels de l'automobile (CNPA) said that the website for applying and processing cartes grises documents has struggled to cope with demand since the process went online in November 2017.

Now, frustrated drivers are taking legal action. Franceinfo said that a driver in Seine-et-Marne was awarded €400 compensation in compensation, and had also been able to pick up his documents within 10 days after the court ordered his case expedited. In another case, a Toulon motorist was awarded €1,000 compensation.

The online system has been plagued by computer bugs since it launched six months ago, including displaying a 'service unavailable' page at key points in the registration process, or failures to take into account drivers who change their name, after marriage for example.

Legally, motorists are unable to drive without a valid carte grise, and dealers cannot deliver new vehicles as registration documents have not been processed.

The Ministry of Interior has pledged to have the service running normally by the summer. According to officials most of the files caught in the backlog now are flagged as incomplete.

In the meantime, temporary plates on all new vehicles sold by car dealers will be valid for four months until the software problem on the carte grise system is resolved.