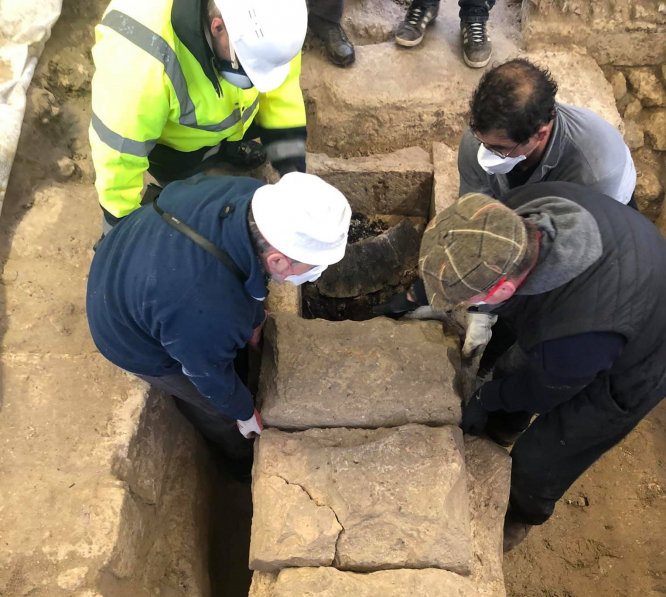 Two children taking part in a dig to initiate the public into the workings of archaeologists made a surprise discovery – a tomb with the 800-year-old mummified remains of an abbot.

Sister and brother Alyssa and Alban Chambard, aged eight and 10, realised they had found something exciting and alerted experts from the association which had organised the search in the grounds of a medieval monastery.

They had been given trowels and buckets and set the task of removing grass, brambles and soil from what had been the floor of the long-lost monastery’s church in the town of Soissons, Aisne.

Nicolas de Schonen, president of the Association de l’Abbaye Royale Saint Medard, said: “They had been shown what to do and told to be careful.

“When they hit what looked like paving, they went very carefully. Then they saw faint engravings on the stone and realised it was something exciting.”

Archaeologists found the children had discovered the masonry cover of a tomb, identified as containing the remains of the abbot of the monastery, Albéric de Braine.

He had been buried in 1206, when the monastery and Soissons were among Europe’s largest trading centres.

The tomb also contained the remains of the rich clothes he had been buried in, the staff of his processional cross and his shoes.

A lead collar had been placed around his neck and head.

“We think the lead collar, which is something no one had seen before, acted as a biocide, killing off the bacteria that would normally decompose a corpse,” said Mr de Schonen. “It is an exceptional find because of the state of the body and the clothes and shoes, but also just from the fact that it has survived.

“The monastery has been looted often, as this part of France has been invaded seven times since the days of the abbot.

“We know he came from an aristocratic family and records show he entered the monastery as a young boy, but that is about all we know about him,” said Mr de Shonen.

Alain Crémont, the town’s mayor, said: “It was a great surprise to find this intact tomb after 800 years.”

After the tomb had been studied, the abbot’s remains were taken to Grenoble where they were sterilised by radiation.

Further research on the mummy will be carried out before the abbot is returned to Soissons.

The monastery dates from the sixth century, when it was a centre of pilgrimage, containing the tomb of Saint Médard, one of the first Christian bishops in France.

Soissons was briefly the capital of one of the kingdoms set up after the death of King Clovis I – usually described as the first French king – in 511.

The association hopes to turn the area into a “fun historic site” to encourage an interest in archaeology and is trying to find out more about Abbot Albéric.