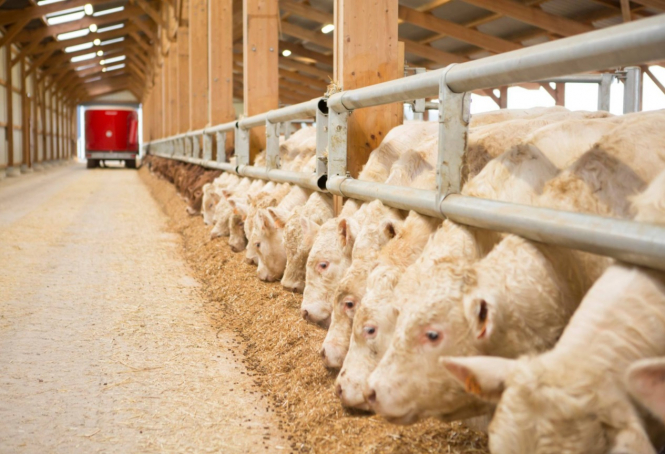 In February, the Saint-Martial farm - on the border of Creuse and Corrèze - was authorised as an 800-animal capacity centre, with potential for 1,000 cows in total.

The “fattening up” model sees beef cows arrive at the age of around eight months weighing around 300-400kg - after having lived with their mothers in pasture up until then -, and leave six to eight months later weighing 600-700kg.

The Creuse farm has been set up according to models already seen in Italy and Spain. There are plans in the pipeline to open other 1,000 capacity farms in the near future, including another in the Creuse, one in the Somme, and another rumoured for Cher.

According to the farm’s own Facebook page and YouTube video (below), animals are kept in open-air, well-ventilated barns, with 10% more space than European rules require, constant access to hay, and a balanced diet without the use of soya feed.

Until now, the 45 farmers that created the collective mainly used to send their animals to Italy for the “fattening up” process.

Many welcomed the project, as they say it keeps their cows at home, allows the farmers to monitor the process throughout, removes the need to export and move animals, makes them less dependent on the international markets, and reduces costs through economies of scale.

The farm also has solar panels to create energy, and a "methanisation" centre, which uses the methane gas produced by the cows to create enough electricity for an estimated 900 homes.

Clément Mazaux, a farmer from Clairavaux, whose animals are at Saint-Martial, said: “We wanted to show that we can create the finished product in France, and be less dependent on the Italian market. The animals have a balanced diet, they have a lot of light; they are very good here.”

Yet, the farm has received much scrutiny; then-Prime Minister Bernard Cazeneuve visited in February 2017, and it has had to obtain authorisation from the department prefect to increase its capacity from 400 to 800 (with space for more).

Critics say numbers of 800-1,000 cows put the site into the “farm factory” category, and say that these kinds of models “cannot possibly work with the environment or the animals’ well being”.

This weekend, a protest took place against the farm took place in Gueret, organised by the farmers and abattoir action association the L-PEA (Lumière sur les Pratiques d’Elevage et d’Abattage).

Protesters are particularly against a decree taken by then-minister for the Environment, Ségolène Royal, which they say was enacted in December 2016, and permits farms to “increase their size with a simple administrative measure”.

This is done “without any risk assessments or study of impact or public enquiry”, said Aurore Lenoir, president of the L-PEA.

She said: “We are talking about an intensive fattening up process that submits the animals to a very aggressive regime in a short time. This can cause liver and joint problems. The suffering may be less obvious than that seen in battery hen and egg farming, but it still exists.”

Laurent Pinatel, himself a farmer in the Haute-Garonne (Occitanie) and spokesperson for farming union the Confederation Paysanne, said: “This is industrial feeding. Farms of this size also ask serious environmental questions. Where does all this animal feed come from? How do we manage such a large amount of farming waste and pollution?”

He added: “Better to keep animals outside, eating grass. This certainly takes longer but it allows us to have much better quality meat. It is possible; many farmers already do this in France, even in the so-called ‘damaged’ [but prestigious] ‘Charolais zone’”.

In the collective farm’s defence, dairy farmer and vice president of the biggest farmers’ union, FNSEA, Etienne Gangneron said: “There is a lot of confusion over this project. The term ‘farm factory’ suggests intensifying production levels. But these 45 farms [in the collective] are not increasing the size of their cattle herds.

“They are just grouping together to use a collective tool that will allow them to feed their animals in one place, and create added value in an industry that really needs this economically.”

Gangneron added: “That they are trying to bring this process to France is a good idea in itself. At the Saint-Martial farm, the animals will not be treated worse than they would be in Italy.”

When contacted for reply, the president of the farm’s collective, Michel Lacrocq, did not comment.