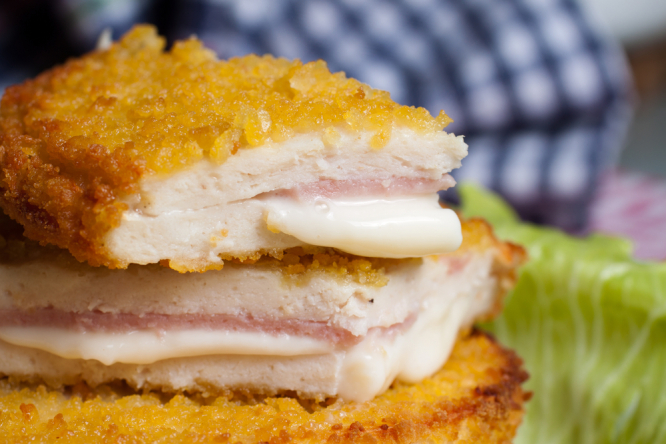 Schools in Lyon will stop serving cordon bleu in canteens from the start of the next school year as it is too processed according to the local authorities, led by the French green party Les Écologistes.

"The cordon bleu is to some extent the epitome of ultra-processed food products, and as such it no longer has any reason to be on the menus of Lyon's schoolchildren," he told LyonMag.

The local council plans to reduce or even eliminate the use of processed products in schools due to numerous studies stating that these products have low nutritional value and contain numerous additives, Le Figaro reported.

Cordon bleu can be cooked in the traditional way with breadcrumbs, an egg, a slice of ham, a veal escalope and cheese such as Emmental.

But the industrial version often features on children's menus, to the point that it has become emblematic of junk food.

In an Arte documentary televised earlier this year, called ‘La grande malbouffe’ (the great junk food), journalists made their own industrial cordon bleu, mixing around 30 different ingredients. They found that it contained very high levels of salt, fat and other additives.

However, the decision by Lyon’s local authorities has met with some backlash.

Eric Ciotti, a candidate in the right-wing primary for the 2022 presidential election, who is also a deputy for the Alpes-Maritimes, criticised the move on Twitter claiming that it is intended as a way to remove meat entirely from schools.

"These ideological far-left mayors should leave our children alone! Behind fallacious motives, this measure is ideological: We ban meat in the canteens. Our children are not your guinea pigs!” he wrote.

Earlier this year, meat was removed from school canteen menus in Lyon for around two months, a move that angered Mr Ciotti at the time.

Bruno Bonnell, a member of the National Assembly for Rhône's 6th constituency, also criticised the mesure on Twitter.

"In the same week in Lyon, we win a Bocuse d'or and we lose a cordon bleu... go figure," he wrote.

The Bocuse d'Or is a biennial world chef championship, which this year was won by Lyon-born chef Davy Tissot.

French journalist Olivier Truchot, from radio network RMC, said the decision was possibly “anti-Macron”, referring to a 2017 video that shows the president trying to order a cordon bleu but being refused as the meal was only on the children’s menu.

A cordon bleu is a dish of meat wrapped around cheese (or with cheese filling), and then breaded and pan-fried or deep-fried. The meat is commonly chicken, veal or ham.

The origins of the dish remain contested, with some food history experts suggesting it came from Switzerland in the 1940s and other reports dating it back to the 1840s in Paris.

The term cordon bleu translates to blue ribbon. In 1578, Henry III of France decreed that the highest order of knighthood be acknowledged by a blue ribbon. The term then evolved and later was used to describe food that was prepared to a very high standard by top chefs.