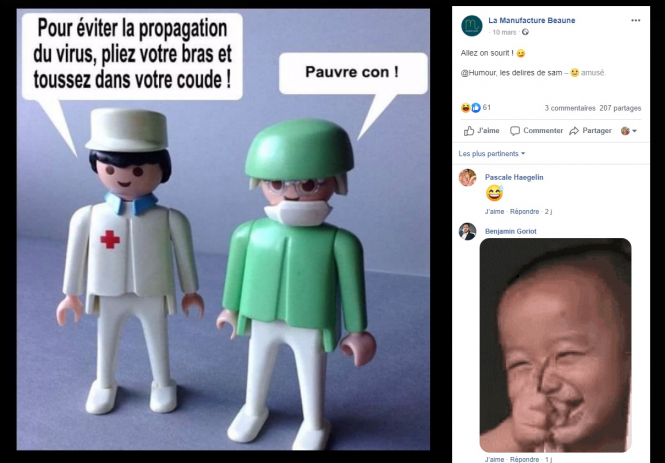 Some jokes in French revolve around the widely-publicised advice to sneeze or cough into your elbow (it is less likely to spread the virus around than sneezing into your hands).

Do you get this one? It says there have been two new cases in La Manche… (hint: there are two meanings in French for the word la manche).

This one with Playmobil figures also plays on the advice to sneeze into a bent elbow....

Meanwhile this cartoon plays on the fact that some people are obsessively using alcohol hand gels (technically in French called gel hydroalcoolique, because it is based on a water and alcohol mix)…

One Belgian parody news site has a story about how 42 clients were left stuck in a brothel after doctors ordered a lock-down because one of the workers was ill.

The men are quoted making excuses like "I’d just popped into ask directions because I was lost…" or "I just wanted to buy cigarettes; I hope my wife doesn't get the wrong idea".

Also in Belgium, one shop used some dark humour to try to sell its stock of Corona lager (which some people have reportedly been avoiding due to the name…): "Buy two Coronas and get one Mort Subite beer free"…

Finally, nothing to do with France, but here a British shopkeeper demonstrates how to maintain a stiff upper lip and protect yourself in the patriotic British way….