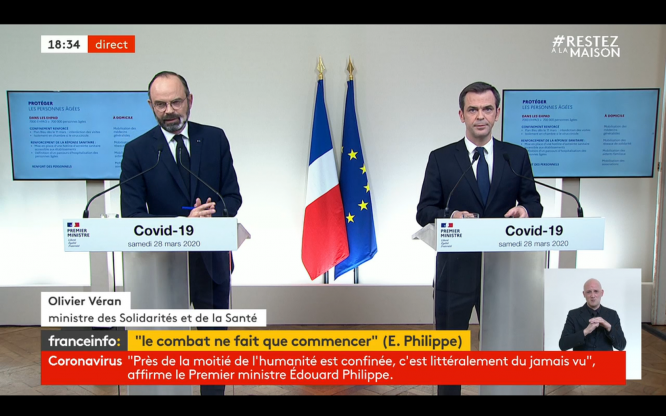 This is the message given by the prime minister of France in a public address this afternoon.

"We are doubling the number of positive cases [of covid-19] every three to four days, so it's a very fast pace.

"We are a few days behind Italy and after Spain in epidemic levels (...), the curves are quite similar.

"The progression is rapid and it's happening at a very consistent rate," said Edouard Philippe.

He said that before this epidemic began, there were 5,000 resuscitation beds throughout France and that maximum efforts had been undertaken to increase this number.

"If the epidemic develops across France, as time goes on, the severe forms will increase and become more and more numerous. (...) We have made every effort to increase our capacity in the intensive care units," he added.

"The second strategy is to flatten the curve so that there are fewer severe cases."

Dr Karine Lacombe, a specialist in infectious diseases and head of department at the Saint-Antoine Hospital in Paris, also attended the press conference and gave an update on what is known about the disease, including the fact that the virus is contagious while the carriers are asymptomatic.

"There are many things we don't know, which leads us to be very humble," she said.

The head of the French health service Jérôme Salomon also spoke and reported that 44,000 people in France have consulted a local GP over symptoms of a coronavirus infection.

Arnaud Fontanet, epidemiologist at the Pasteur Institute, said: "For people who are sick with Covid-19, in the absence of control measures, each patient will infect 3 people. With control measures [barrier and social distancing measures], [this figure] can be lowered. We want to bring it below one. If each patient infects less than one person, the epidemic will decline.

"To estimate the impact, we're going to have to wait a little bit, ... hopefully by the end of next week."