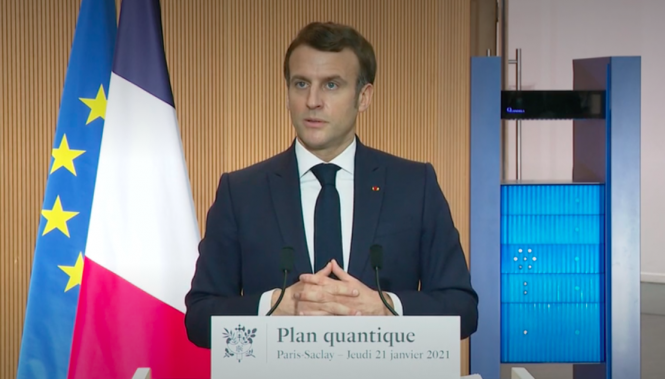 Responding to criticism over government mistakes, the President said: “Our errors are what teach us the most”
By Joanna York

President Macron yesterday criticised a culture of “incessant tracking of errors” in France during the Covid-19 health crisis, saying he thought France had become a “nation of 66 million prosecutors”.

The President was speaking in Essonne, Ile-de-France, to announce a national investment of €1.8 billion in quantum technologies - but also discussed criticism over management of the health crisis.

He said the government’s Covid-19 strategy accounted for “risks and mistakes” as “those who do not make mistakes are those who do not try to do anything, or who mechanically do the same thing as yesterday”.

The President added: “I say this because what goes along with our French defiance is this tendency to incessantly track errors. That means we have become a nation of 66 million prosecutors. This will not help us face the crisis and make progress.”

“We need women and men who look for answers, who are able to invent what is not already clear, and to make mistakes so they can be corrected as soon as possible and improved. That’s what makes a great nation."

Opponents have responded with criticism. Politician and leader of the UDI party, Jean-Christophe Lagarde told news source FranceInfo: “Are we 66 million moaners?

“Yes, that is part of the French character. But that doesn’t mean that because we complain we are wrong.”

“They should take that as a good thing. That is democracy. It’s not about singing the government’s praises when they get things wrong.”

Mr Lagarde said that the onus was on the government to admit that “sometimes they get things wrong”, such as mixed results over mask-wearing and Covid testing.

He said: “They must give people in France very clear information” - especially in the context of new virus variants currently spreading in France.

In light of the highly transmissible new strains, Mr Lagarde said the government were already preparing for a third lockdown “some time in February”, even though no official announcements have been made.

He said if the option of a February confinement were put on the table in advance, there could be a “calm debate, without taking the government to trial over it”.

France looks to extend state of health emergency to June 1