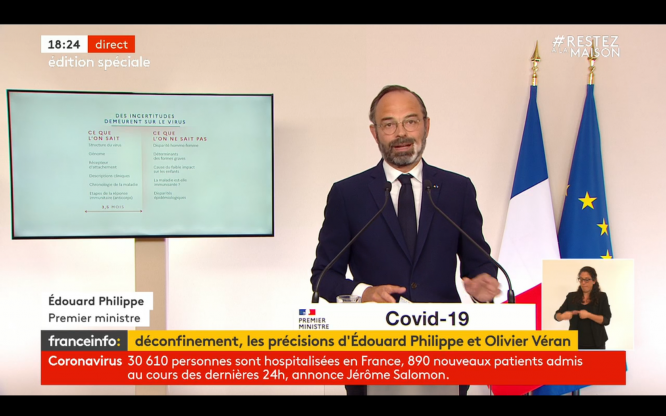 Progressive deconfinement from May 11;

Too many people suffering from non-Covid-19 related illnesses and chronic diseases are not continuing their necessary care. Consultations are considerably down sparking concern. There has also been a drop in cancer screening and vaccinations. Health Minister Olivier Véran said the message to patients is strongly: Do not ignore the healthcare you need;

Mr Philippe announced a "probable" requirement for mask use on public transport from May 11;

The Prime Minister evoked the three points which the government sees as essential after the end of confinement: maintaining 'barriers', wide-scale testing and the isolation of patients (either at home or in dedicated establishments depending on their family home situation). The exact details of the deconfinement procedure will be debated in parliament at the beginning of May;

From Monday April 20 family visits to the residents of elderly care homes in France will be possible, under certain conditions;

The government is planning a weekly production of 17 million general public masks;

The wearing of a mask is recommended after the deconfinement as part of the barrier requirements but it must not mean that other barrier gestures, such as social distancing and the frequent washing of hands, are neglected. The provision of masks will be worked out with mayors, local services and perhaps shops;

The nation will not return immediately “and probably not for a long time" to the "life it enjoyed before the health crisis". "We have not emerged out of this,” said Mr Philippe, although he added that progress was being made and that the situation is “gradually improving, slowly but surely". He said advances were in a large part due to the confinement rules which were in the vast amount of cases being respected;

A reopening of schools will start from May 11 but will not involve all schools at the same time. The openings could possibly be staggered “by territory" or "part of the class", dependent on the local situation. Various scenarios are being studied;

Remote / home working must be maintained after May 11 "as much as possible";

The government hopes to be able to carry out 500,000 tests per week (compared to 25,000 today) from May 11 to see if people showing symptoms of the virus or having been in contact with people who are sick have the virus. This is so they can isolate if necessary;

The reopening of shops will be staggered and will not be immediate from May 11 for cafes and restaurants. Distancing will be necessary.

The health crisis will cause the strongest recession in France since 1945.

Deconfinement should be guided by two principles, the Prime Minister said: "preserving the health of the French people" and "ensuring the continuity of the nation's life".

Nearly 20,000 people have now died from the virus in France with 227 additional deaths reported from hospitals in the last 24 hours (compared to 364 in the previous 24 hours). This brings the total to 12,069 deaths in hospitals since March 1 and 7,649 deaths in homes for the elderly (Ehpads) and other establishments making a total number of 19,718.

Presently 30,610 people are hospitalised for a coronavirus infection - 29 less than on Saturday. Among them, 5,744 serious cases are in the intensive care unit, 89 fewer than on Saturday. It is the 11th consecutive daily decrease.