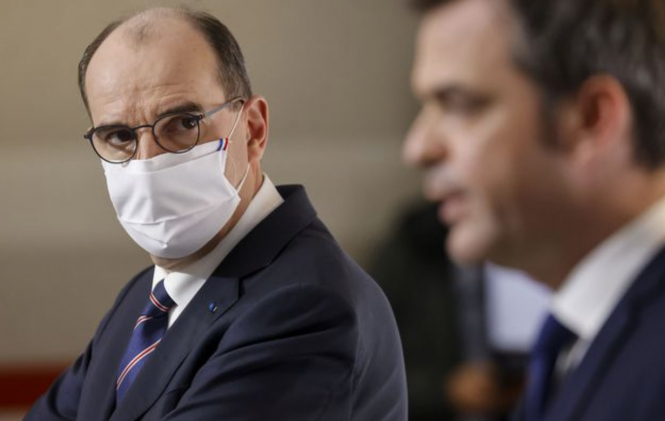 Twenty departments in France are waiting to hear if they will be placed into more severe anti-Covid measures as the government met this morning, with weekend lockdowns one of the proposed options.

Government spokesman Gabriel Attal announced at 13:00 at the end of the meeting: “We are maintaining a progressive approach, territory by territory. Each region is different.

“Almost a year after the first confinement, I understand that some people struggle to find meaning in this period. We have to hang in there,” he said.

He added that it is hoped that life will begin to return to more normality from mid-April.

The Prime Minister Jean Castex is to hold a press conference tomorrow when new announcements are expected.

It comes as later this afternoon President Emmanuel Macron is set to meet with top ministers - including Mr Castex - to discuss strategies to reopen public places such as museums, sport stadiums, theatres and cinemas. The idea of a “health pass”, described by the president last week, is among the ideas being considered.

All departments affected are within Ile-de-France, Rhône, Bouches-du-Rhône, most of Hauts-de-France, Drôme, Moselle, Meurthe-et-Moselle and Eure-et-Loir.

Last week, Mr Castex said: “The health situation in our country has worsened over the past few days.”

He said that all areas under higher surveillance have a “high level of incidence [cases per 100,000 people] a variant level higher than 50%, hospital pressure reaching a critical threshold, and, lastly, a viral circulation that is starting to speed up seriously”.

He added: “We will update you next week and we will decide: if the situation continues to worsen, we will take heightened measures that will come into force from the weekend of March 6.”

Pas-de-Calais is on particular alert. Last night, the department prefect called for a lockdown to be imposed for the three coming weekends, as case numbers rise, confirmed Arras mayor Frédéric Leturque.

Authorities in Pas-de-Calais are set to meet this evening to discuss possible restrictions and to await the decision from the government defence council.

Ile-de-France is also at risk of a weekend lockdown. Two prefects and the director of the Agence Regionale de Sante (ARS) in Ile-de-France made the suggestion this week to Paris mayor Anne Hidalgo.

Yet, Ms Hidalgo has said she is against such an idea, calling it “difficult, harsh, and even inhumane”.

Paris MP Anne-Christine Lang told news service BFMTV: “We are trying to hold on, to avoid a national lockdown such as we had [last] March, because we know it would be particularly difficult.

“We should lockdown at the weekend, or maybe close off certain areas, as we saw that at the weekend, the river side, the Canal Saint Martin [were extremely busy]...these are some of the options on the table.”

Some doctors have suggested that even a weekend lockdown would not be enough to sufficiently curb cases, and that even harsher measures are needed.

Dr Ludovic Toro, GP and mayor of Coubron in Seine-Saint-Denis, told BFMTV: “The more we take time and take half-measures, the less we will exit this pandemic. The term ‘inhumane’ used by the mayor of Paris, I find that divorced from reality.

“What’s inhumane, is that soon we will be forced to choose who can go into intensive care and who cannot, and it will continue. The curve is only going up, in all the projections, in the next two weeks.

“And right now, we’re discussing if we could maybe close at the weekends? It’s a joke.”

Weekend lockdowns have already been imposed in the Nice and Alpes-Maritimes region, and in Dunkirk and the Nord.

In these areas, it is already forbidden to leave your house at the weekend without a valid attestation, and wearing a mask is mandatory in all outside areas if you do need to go out. As in previous lockdowns, the fine for non-compliance is €135 for the first offence.

The curfew from 18:00 to 06:00 also remains in place. Inter-regional trips are also not allowed at weekends (Saturday and Sunday).

2 hours ago
3
French farmhouse renovation: DIY tricks to get rid of rats