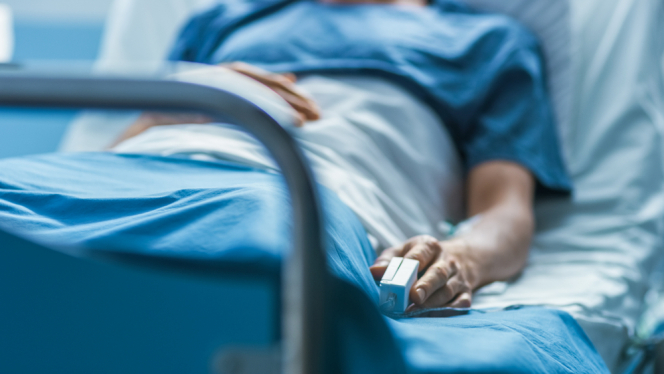 The average age of Covid-19 patients in intensive care in France has dropped to 59, and 85% of patients being taken into hospital are not fully vaccinated, new figures show.

The average age of patients being hospitalised (outside of intensive care) is now 57, down from 72 last November, the most recent update from health body Santé publique France shows.

The age of patients in critical care is now 59, down from the averages of 63-70 seen during previous Covid waves.

Dr Ferhat Meziani, head of intensive care at the Nouvel Hôpital Civil (NHC) told Le Figaro: “We currently have a 40-year-old woman in intensive care”, while Professor Marc Leone, intensive care doctor at the Marseille CHU, said: “We have admitted a young 33-year-old man without any underlying conditions.”

Professor Erika Parmentier, who works in intensive care in Lille, said: “The waves keep coming but our patients get younger. The most difficult thing is that these patients didn’t have to die.”

During a visit to Aix-en-Provence, where hospitalisation rates have quadrupled in a week, Health Minister Olivier Véran said: “After the time of an epidemic wave, comes the time of a hospital wave.”

Why are patients younger?

The virus is spreading faster in this part of the population, which is more likely to be moving around and also less likely to adhere to strict barrier measures.

The level of incidence (number of cases per 100,000 people) is also extremely high in some regions as the Delta variant continues to spread, with some areas approaching 1,000 new cases in some mainland regions, far higher than the alert threshold minimum of 50 and maximum of 200.

Professor Alexandre Bleibtreu, head of infectology at the Pitié-Salpêtrière hospital in Paris, said that young people will likely fear the virus much less than older members of the population.

He said: “We have also been telling them, for the past year, that they aren’t risking much and won’t get a severe form of the virus [if they get it].”

Epidemiologist Henri Leleu explained that the drop in age is a “purely structural effect”.

He said: “Young people are less likely to go into intensive care than older people, but they are less vaccinated. Vaccination mainly protects against the risk of getting a severe form [of the virus].”

People under 50 are twice as likely not to be vaccinated as older generations.

‘Cannot say’ for sure

However, older people over 70 have not completely escaped this fourth wave, with incidence rates rising among this age group too.

“We will have to wait several months, as we did for the Alpha variant, to establish a real body of study that will allow us to know what is going on.”

Vaccination helping to keep pressure down

Despite the dropping age of patients, vaccinations appear to be keeping the pressure on hospitals low in many areas, and the pressure is much lower now than during previous waves.

Yet, even in these departments, the bed occupancy level is still low, at around 25% on average.

Most of the hospital pressure is in the south and south-east of the country, in tourist areas, where people are travelling frequently.

The highest intensive care occupancy rate is in Corsica (72%), with intensive care admission have jumped by 257% in Corse-du-Sud, and 146% in Haute-Corse, in the past seven days.

Provence-Alpes-Côte d’Azur and Occitanie have the second and third highest levels after Corsica, with 44% and 38% intensive care occupancy respectively.

The fourth-highest region is Nouvelle-Aquitaine at 25%. This department is still in ‘plan blanc’ - a plan that allows for the provision of more beds, but which does not yet signal a major emergency.

These relatively low levels in most areas are being attributed to the vaccines.

An average of 650,000 injections are still being given out each day (first and second jabs combined), and more than 54% of eligible adults are now fully covered (36,628,258 people), the latest figures show.

More than 65% of the eligible population has had at least one injection.