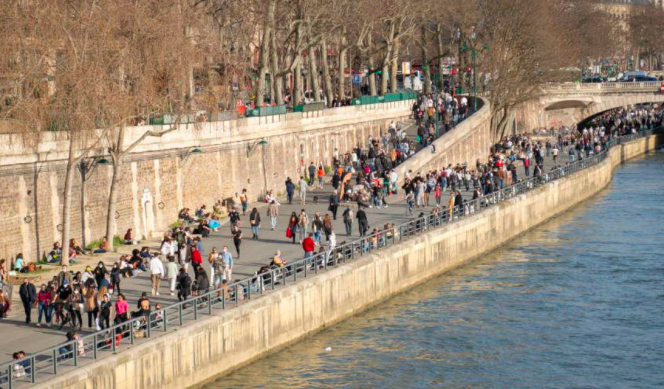 Prime Minister Jean Castex will give a press conference at 18:00 today announcing new health measures in 20 departments on “heightened alert” for the Covid-19 virus.

But the French press is reporting that weekend lockdowns will not be announced in Paris and Marseille, as previously thought.

News service FranceInfo reported that a government source said that doubts over whether inhabitants in the two cities would accept a new confinement had played a role in the decision.

Mayor of Paris Anne Hidalgo had previously said she saw the introduction of a weekend lockdown in the capital as an “inhumane” measure.

The source said that senior politicians had been informed that the public felt weary and sad at the prospect of a lockdown being introduced.

But, a government source told newspaper Le Figaro: “The trade-off is that other measures must be completely respected and social interactions must be limited to the maximum.

“People cannot stop paying attention now, but must double down on their vigilance, especially at the weekend.”

This may mean that stricter rules could be announced for allowing customers into shops, for example.

The prime minister is expected to announce a weekend confinement in Pas-de-Calais, where hospitals are now under strain, as cases have spread from nearby Dunkirk.

Dr Patrick Goldstein, head of A&E and paramedics at Lille hospital told FranceInfo: “Tension has spread from Dunkirk to all other hospitals in towns in Nord and Pas-de-Calais.

“Today, the whole [northern] coastline is in difficulty.”

A government source said that to be effective, a confinement in the area would have to last for four consecutive weekends.

The local prefect had previously suggested a lockdown for three weekends in the department.

Dr Goldstein said he supported the idea of a local confinement, but “found it hard to understand” why the same measures would not be introduced in the French capital.

This view was shared by the mayor of Touquet-Paris-Plage, Daniel Fasquelle, who said: “The incidence rate is at the same level in Pas-de-Calais, Paris and the Ile-de-France region.”

He questioned how the government could “decide against a confinement in Paris because residents wouldn’t like it, but in Pas-de-Calais we haven’t been asked for our opinion.

“They’re imposing confinement on us.”

Decisions for all 20 departments coming this evening

A source told FranceInfo that in his speech tonight Mr Castex would reassess the list of 20 departments on heightened alert.

“[There will be] some taken off and some added to the list of 20 departments,” the source said.

While lockdown may have been avoided in some departments, for now, a minister told FranceInfo that the government remained worried about the increasing spread of the UK variant of the virus.

The minister said that if alternative measures announced tonight were not effective, “we will have no other choice than to close schools and announce a national reconfinement”.

The prime minister and the health minister will announce measures for all 20 departments currently on heightened alert for the Covid-19 virus at 18:00 tonight.