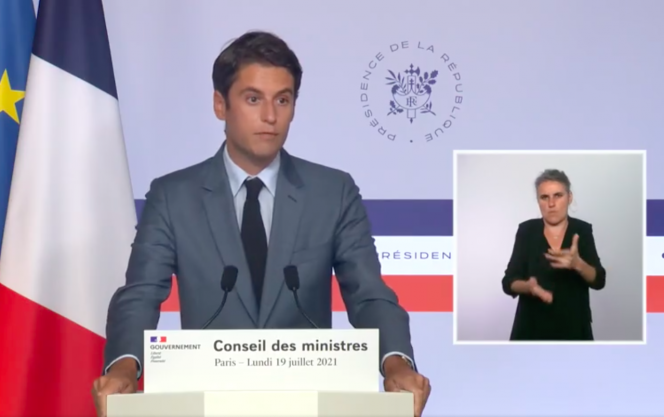 Mr Attal said the fourth wave was largely made up of cases of the highly contagious Delta variant Pic: Elysée / @Elysee / Twitter

Mr Attal said that the fourth wave was “faster, with an upwards curve that is straighter than all previous waves”.

The incidence rate (the number of cases per 100,000 people in the past seven days) has risen by 125% in the past week, with 80% of new cases being the Delta variant.

“We have never seen an increase of this type – so strong, and so sudden – in France,” Mr Attal said.

The number of daily cases has been rising steadily since late June. The latest figures from July 19 show that there were 4,151 new cases reported in the past 24 hours (however cases are typically lower on Mondays as laboratories are closed over the weekend).

Figures from July 18 show that there were 12,532 cases reported in the previous 24 hours.

Mr Attal was speaking to the press after new rules for extending the use of the health pass (pass sanitaire) were approved by the Conseil des Ministres (a cabinet of senior ministers).

The rules have also passed through the Conseil d’Etat (France’s supreme court).

Tomorrow it is expected that parliament will vote to pass the rules into law.

Use of the health pass is set to be extended to leisure and culture spaces that can accommodate more than 50 people from Wednesday, July 21.

From this date, people will not be able to enter spaces including museums, cinemas, theatres and theme parks without showing proof that they are fully vaccinated, have a negative PCR test result taken within the past 48 hours or have had Covid and are considered immune.

Mr Attal said there would be an “adjustment period” to help people working in these places implement the new measure. This period could last one week or more.

During this time, checks by law enforcement to see that health passes are being verified will have the aim of “helping” establishments set up the process.

A few hours before Mr Attal spoke, the Conseil d’Etat rejected the suggestion that health passes should be needed to access shopping centres.

It said such a move would be a “disproportionate attack on civil liberties” especially for people who cannot get vaccinated on medical grounds and so would be forced to pay for Covid tests in order to enter.

But Mr Attal said the pass could still be needed to enter shopping centres, as long as “access to basic necessities [without a pass] is guaranteed throughout the country”.

He said that health passes would likely be needed to enter large shopping centres over 20,000m2.

When the government first announced the implementation of the health pass it indicated that the penalties for establishments that did not check passes would be a €45,000 fine and a year in prison.

Mr Attal said yesterday that the heaviest fines would only apply to repeat offenders.

New rules put forward by the government would introduce mandatory 10-day isolation periods for anyone who tests positive for Covid-19.

During this time, people in isolation would be subject to random checks and could face fines for breaking the rules. Previously these measures have only applied to people returning from trips overseas.

However, checks will not be done at night time from 23:00-08:00 following a ruling from the Conseil d’Etat.