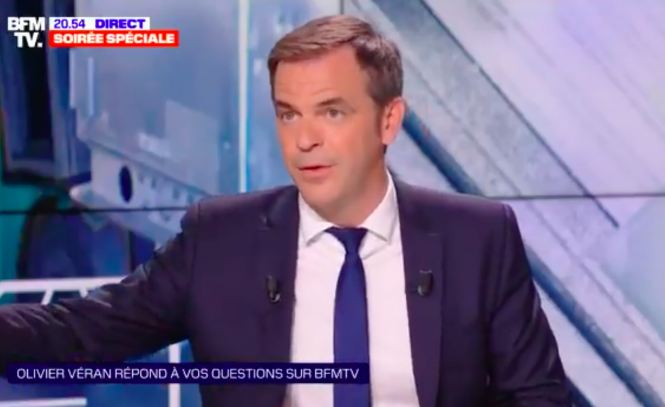 Health Minister Olivier Véran said that the government has the “firm intention” of making a success of the end of confinement, the first stage of which begins tomorrow.

From May 19, restaurant and bar terraces, cinemas, museums and all shops can reopen, with health protocols in place.

Read more: What is opening in France from May 19 this week?

Mr Véran said the goal for reopening was to “enjoy our new freedoms, but to do so in a way that means they will last… We were successful in coming out of confinement last year on May 11. We did it at a good pace, that allowed us to not go backwards once we had announced it.”

Speaking to BFMTV on May 17, the health minister took questions from the public on a range of subjects relating to the health crisis.

We summarise the key points.

End to wearing masks outside ‘soon’

Mask-wearing is currently obligatory in all indoor and outdoor public spaces in France, but the rules could be lifted outdoors “very soon” if the circulation of the virus continues to reduce.

The health minister said: “We are not yet there in France. We will be soon.”

He said that masks were still necessary in busy outdoor spaces, especially as many people in France are still waiting to be vaccinated. But, he said that he could envisage the rules being relaxed more quickly in less populated areas.

He said: “I don’t think we will be asking people in France to wear masks on the beach, on a deckchair.”

But Mr Véran also stressed the need for barrier measures to continue as venues are reopened this week.

He said: “We will regain our freedoms gradually, beginning on Wednesday morning, but we will still need to continue our efforts, including barrier gestures.”

Health passes for sports events with over 1,000 people

The health minister confirmed that health passes would not be needed for restaurants or cinemas, but they will be needed for sports events with over 1,000 people.

Health passes will be used to prove that the bearer has either been vaccinated against Covid-19 or has a negative test result from a PCR test taken in the previous 48 hours.

Mr Véran confirmed that people who chose not to get vaccinated will be still able to access events and public spaces, with a health pass proving a negative PCR test result where needed. But he added: “People who have not been vaccinated will be at a disadvantage compared with those who have, as they will not be protected against the virus.”

Decision on reopening nightclubs to be made in ‘coming months’

Mr Véran described the decisions on when to reopen nightclubs in France as “the thorniest question” but added: “We cannot deny that there is a relationship between parties being held elsewhere, if nightclubs stay closed long-term.”

The process of working out the health protocol for nightclubs will begin before the end of June, and could include using the French health pass.

Nightclubs in France have been closed since March 2020.

Marriage ceremonies could be ‘as normal as possible’ from July

Mr Véran said marriages planned for after June 30 should be able to go ahead without any health protocols in place, “if everything is going well”.

From May 19, weddings can go ahead with one guest in every third seat, staggered between rows. Food can be served outside.

From June 9, this will increase to one guest in every second seat, with food served indoors in venues at a maximum capacity of 50%.

The health minister said that children in France would “maybe” have access to Covid vaccines, but that the question would be addressed in the future, once all adults in France had been offered vaccines.

He said: “Health authorities think that [vaccination] could be necessary, at least from the age of 12 and up… but we still need authorisation from the European Medicines Agency.”

Mr Véran also spoke about whether French data scientist Guillaume Rozier would receive a national award, such as the Légion d’honneur, for his work during the health crisis.

Mr Rozier voluntarily developed the websites CovidTracker and VaccineTracker, which make data about French Covid figures accessible to the public via easy-to-read graphs.

He also developed the ViteMaDose app, which helps people to find vaccine appointments close to where they live.

The health minister said Mr Rozier was not eligible for the Legion d’Honneur, as he is under 36 years old. He added: “If he wants an Order of Merit he can submit a request.”

Mr Véran answered more questions in another interview with BFMTV on May 17, live streamed on the online platform Twitch.

Responding to a question unrelated to the health crisis, he said that his monthly salary as a government minister is €6,500 net.

He also gave details of his morning routine, which includes drinking two coffees and listening to music.