Covid France: When can we stop wearing face masks? 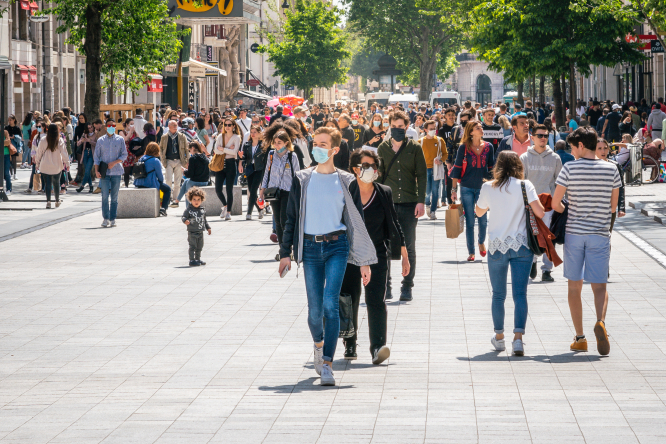 Politicians and scientists hope that rules could be relaxed over summer, if the health situation allows Pic: Keitma / Shutterstock

*This article was updated at 13:30 on May 20 to include President Emmanuel Macron's comments

President Emmanuel Macron has said that masks will remain mandatory until at least the end of June.

He did not state if he was referring only to outdoor areas, but this is most probably what he meant as Health Minister Olivier Véran said on May 16 that the rules on wearing masks outside could be changed soon.

President Macron was asked today on a trip to Aube by a member of the public when “we will be able to take masks off“.

He responded, "we have to be careful because the virus is still circulating, so when we have passed a certain level of vaccination, we will be able to look at this rule again".

He said the rule cannot be eased too quickly as there are still too many people unvaccinated.

Mr Véran said on Sunday that the obligation to wear a mask could soon be lifted in outside areas, “if you are alone or with a few people in a very large, airy space such as a beach, a mountain, a forest, a park, or an empty street”.

French rules currently state that masks must be worn in enclosed public spaces, but the decision to make masks mandatory in outdoor public spaces comes from local authorities such as mairies and prefects.

Read more: What is opening in France from May 19?

In departments such as Seine-et-Marne, Ardèche, and Hérault, the obligation to wear a mask outside was lifted on May 18 – as long as people respect social distancing measures.

But senior government ministers are against the move.

Interior Minister Gérald Darmanin told FranceInter on May 19 that he had asked the prefects to bring back the rule in the interests of “national standardisation”.

He added: “The moment will come [for lifting rules on masks], but it is not here yet.”

The departments of Seine-et-Marne, Creuse, and Ardèche swiftly reinstated mandatory mask-wearing, with the prefect of Seine-et-Marne telling FranceBleu the rules would stay in place until “at least” the end of May.

Modelling from l’Institut Pasteur found that barrier gestures, including mask wearing, can be safely relaxed when 90% of the adult population is vaccinated, equivalent to 43million people.

Figures from Santé publique France from May 18 show that just over 21million people have been given a first dose of the vaccine in France so far.

He said: “If the decrease in infections continues significantly for some time and efforts to vaccinate people are accelerated, we can hope that the epidemic will calm down in summer.

“But we could see a return [of infections] in autumn when conditions for transmission are favourable, if we haven’t vaccinated enough people by then. In that case, we would have to maintain some barrier gestures.”

He said doing so would decrease transmissions by 15-20%.

But for some the question is not just one of science.

Economist and essayist Professor Olivier Babeau wrote an open letter published in Le Figaro on May 19, calling for an end to obligatory mask-wearing on the grounds that it “dehumanises” people and will cause fractures in society.

He wrote: “Behind the mask that hides the features, the man or the woman is no longer an individual, but a being whose undefined appearance does not appeal to our humanity.”

He added: “Do we not see the incredible irony in a situation that makes it mandatory to wear a mask on your face or get a fine, after so much time was spent debating a ban on the hijab?”

“[Masks] protect us, without a doubt; but above all they separate us.”

7 hours ago
3
Covid-19: Rules for travel to and from France

16 hours ago
4
France considers petrol cheques: What are they are, who would benefit?