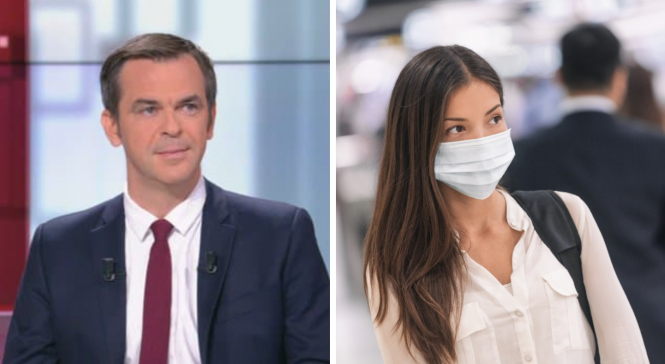 Rules for mandatory mask-wearing outside could change at the end of June, the health minister said Pic: Left: BFMTV / @BFMTV / Right: Maridav / Shutterstock

The health situation in France is improving and the “war” against Covid could even be “won” by autumn, the health minister has said, as he discussed possible “differentiated” rules on mask-wearing in July.

Olivier Véran said the health situation is improving across most of the country but that he is maintaining “awareness” of the Delta (or ‘Indian’) variant.

He told BFMTV: “Overall, the epidemic situation is continuing to improve significantly across most of the country, with a drop of 20-25% in the spread of the virus each week. Gradual deconfinement has not stopped this.

“The [health] indicators are, in general across the country, on ‘green’”.

The minister also commented on the current rule that requires mask-wearing at all times outside.

He said that while France would “not ask people to wear a mask outside for one day longer than necessary”, this rule would not be lifted before the end of June, “more to protect other people than to protect yourself”.

He said that over the summer there could be varied rules, depending on where you are, and the possible risk outside.

Rules could be split along three types of spaces, he suggested:

No definite rules changes were announced, and wearing a mask outside is still mandatory for now.

Mr Véran said that the government was keeping vigilant towards the Delta variant, but did not consider its spread as an “extension of the epidemic”.

He said that the variant was contained to a few “clusters” in certain regions, especially Landes.

He said: “The virus is continuing to decline. This battle will be won when [the number of patients in intensive care] falls below 2,000 cases.

“The war [will be won] when climate conditions and the spread of the virus mean that we could be exposed to another epidemic wave. If that doesn’t happen, we will be able to say that Covid has gone.”

Yet, the minister said that it was still important to maintain physical distancing measures, especially for people who have not yet been vaccinated, or whose vaccination has not yet had time to take effect.

He said: “In the emergency rooms, we have a certain number of patients who have had one injection, who have not had both injections, and who thought they were safe, too soon.”

Mr Véran said: “The level of protection provided by a first injection, especially after a few days, should not change anything in your daily life.”

It comes after doctors warned that a rising number of people were appearing to drop barrier measures after receiving the first vaccine and becoming infected with Covid as a result, before their vaccine has had a chance to take effect.

This has been dubbed ‘vaccinated syndrome’. Professor Alain Fischer, president of the government’s vaccination strategy, said it was important to raise awareness of the issue.

“Vaccination is a process that leads to protection, but not in one day,” he told LCI.

He said that people should not consider themselves protected against Covid-19 after just one dose of a vaccine.

“We need to remind people of this.”

How long does the vaccine take to work?

The time it takes for the vaccine to reach full effectiveness depends on the type of jab, your age, and overall level of health; but the World Health Organisation (WHO) advises that the average time is around two weeks.

All vaccines are only fully effective after the patient has received all injections required (one, two, or three), plus this extra waiting time.

A study in medical journal The Lancet found that the first dose of a vaccine offers 57.7% effectiveness against infection, 75.7% against hospitalisation, and 77% less chance of death among people aged 16 and over.

Another study, in The New England Journal of Medicine, showed that the Pfizer vaccine offered “a vaccinal effectiveness of 92.6%, similar to that of Moderna, of 92.1%, after the first dose”.

The most recent figures in France (from June 6) show that there were 2,847 new admissions to hospital over the past seven days, of which 671 were to critical care units and 478 of those were to intensive care. There are currently just over 2,500 Covid patients in intensive care nationwide in total.

So far, 13,652,005 people have received all the doses of vaccine required for full coverage (one, two, or three injections), depending on the vaccine used and their medical situation.

Covid France: Delta variant update for June 6 as new cases confirmed
Covid France: Why are cases rising in the south west?
How is France tracking spread of Indian variant of Covid-19?
South west France and Covid case rises: ‘We must stay vigilant’

8 hours ago
4
How will foreign visitors to France use the health pass for going out?