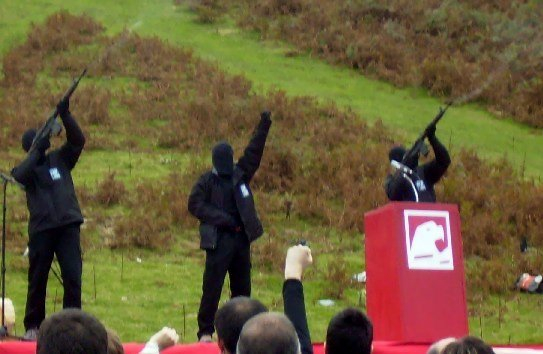 A crowd of up to 20,000 attended a ‘Disarmament Day’ event in Bayonne, Pyrénées-Atlantiques as Basque separatist group ETA revealed the location of its arms caches to police.

ETA has been responsible for killing more than 800 people in its 40-year fight for an independent state in northern Spain and southwest France. It declared a ceasefire in 2011.

The organisation promised to disclose where its weapons were hidden and on Saturday police found nearly 3.5tonnes of arms and explosives in eight different locations, including in Gers and Hautes-Pyrénées.

Among those attending the ‘artisans of peace’ event in Bayonne alongside Basque civilians and elected officials, was Reverend Harold Good, who acted as an independent witness to IRA decommissioning in 2005.

"It's been a very significant day today, hugely significant," Mr Good said. "For us in Northern Ireland the decommissioning process opened up new opportunities.

"I've been coming and going to the Basque country over a number of years now and we've been trying to encourage them towards this day.”

Last week, ETA told the BBC that it had handed over its weapons and explosives to civilian intermediaries, who would hand them over to authorities.

"The French government welcomes this operation, carried out calmly and without violence," French Prime Minister Mr Cazeneuve said in a statement.

"It's a decisive step towards the end of Basque separatist terrorism."

The Spanish government, however, said that handing over the weapons provided zero impunity to those who have committed crimes.

"It will not reap any political advantage or profit," said spokesman Inigo Mendez de Vigo. "May it disarm, may it dissolve, may it ask forgiveness and help to clear up the crimes which have not been resolved."