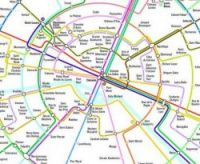 GOOD news for anyone who has ever been lost on the Paris Metro and confused by the congested maps of the lines - an English academic has redrawn the map so that it is clearer and easier to see where you want to go and how you can get there.

Maxwell Roberts, senior lecturer in psychology at the University of Essex, has simplified the design so that it halves the time travellers take to work out their route from one place to another, Le Figaro reports.

He took on the challenge of Paris, one of the largest and most complex underground public transport networks in the world, after redrawing the London Underground map in organised circles in 2012. His business, Tube Map Central, has focused on several cities around the world.

The map is systemic, which means it is not geographically accurate, but its ‘curvilinear design’ is said to be easier to read. In tests, travellers were able to work out their optimum routes to their destinations in half the time, Le Figaro reports.