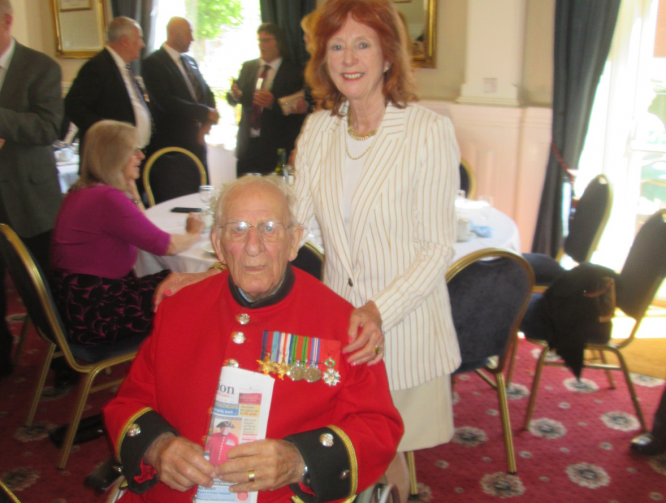 Connexion is sad to report the death on the afternoon of Saturday April 5 of Chelsea Pensioner Frank, who was among the British forces that helped liberate France after he landed on Sword Beach on June 6, 1944.

A good friend of the paper, Frank, who had French Huguenot ancestors, was well-loved and known for his resilience and good humour despite his physical difficulties in later life.

Connexion journalist Sally Ann Voak, who became a friend after interviewing him for the 75th anniversary of D-Day last year, said: “I saw Frank two weeks ago and he had many problems - legs, tummy etc. - had just had several operations and was confined to his wheelchair, although as usual he was full of jokes.

“His big sadness when we talked on that day was that he would not be able to go to Normandy this year to remember and honour his D-Day  comrades. He did not want to be ‘crocked’, he said, and be a nuisance to others on the trip.

“His son Bryan told me: ‘Despite so many battles this was one he couldn't win. He didn’t beat the virus, although he fought bravely for several days’.

“The sad thing is that, of course, his loved ones could not be with him.”

Frank’s daughter-in-law Debbie said: “Frank touched so many people’s lives in his unique and wonderful way. He was a one-off and we shall miss him so very much. It is some comfort to be blessed with so many happy memories of Frank and to know that he was loved by many people.”

Frank’s friend Brigitte Corbin from Ouistreham, Normandy, who hosted him on his visit to France last year for the D-Day anniversary (image below shows her in black and red, next to Frank), told Sally: "Frank was an exceptional man. He had time for everyone, young and old, he was the bravest of the brave.

“When he stayed with us  for  D-Day  commemoration events he gave us so much joy with his humour and thoughtfulness.

“He was a great raconteur, enthralling everyone with tales of his many adventures and he always had a twinkle in his eye. We all loved him.

"His friends in France will miss him so much, We send our condolences to his family and friends here and in the UK. It was an honour to have known him."

The Royal Hospital Chelsea, home to the Chelsea pensioners, told Connexion the final cause of Frank's death is still unclear.

Royal welcome for our Frank