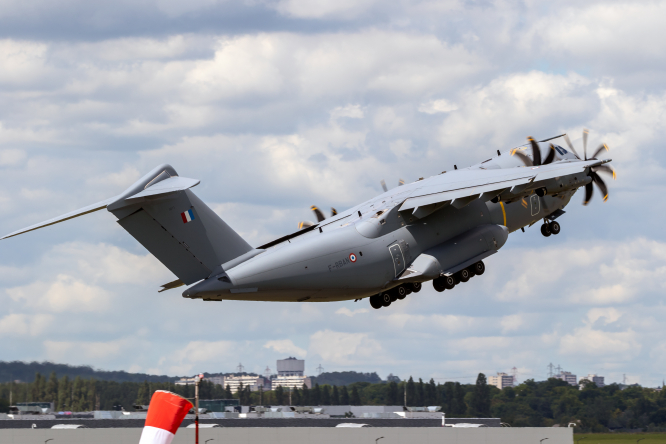 The Airbus A400M is a military plane which is being used as part of a training exercise this week Pic: VanderWolf Images / Shutterstock

Residents of the Dordogne have reported seeing a large Airbus A400M plane circling the skies above the department this week.

The Armée de l’air et de l’espace has confirmed that this is part of an annual military exercise taking place across southwest and central France, which will last until October 15.

This exercise is called Volfa, a three-week-long period of high intensity combat training which involves around 25 manoeuvres carried out at all times of the day and night and using 50 different planes.

The A400M, which was spotted above Thiviers and Savignac-les-Eglises on Tuesday (October 5), is a military transport plane which was used during this summer’s Kabul Airport evacuations.

There are currently two such aircraft sitting on the Périgueux-Bassillac Airport runway.

This year’s Volfa exercises revolve around a fictional scenario, explained by the Armée de l’air in a statement.

“After six months of tensions in Greyland [the southern half of France] and under Resolution 1805 of the United Nations, France is preparing to launch operation Volfa.

“The objective: protect civilian populations against the armed forces of Marko Ramius [the protagonist of spy thriller The Hunt for Red October], president of Redland [a territory of northern Spain that is encroaching on the south east of France].

“The United Nations Security Council has ordered Redland to evacuate its forces [from the area] with immediate effect, and will be supported by a Joint Task Force in Greyland.

“The Air Force, with its 850 qualified pilots, is launching its mission, joined by its German, Canadian, Belgian, British, Danish and Spanish allies.”

“The idea is to train ourselves for high intensity conflicts of the future,” a spokesperson for the Volfa programme explained to actu.fr. “We imagine an adversary that is almost as well-equipped as we are and we prepare for combat.”

This year’s Volfa exercises have centred on the Landes department around the Mont-de-Marsan Air Base. However, the majority of the combat training has taken place above the Massif Central, where the Air Force has an air zone reserved for this purpose.

Residents in areas between the two training zones may therefore have noticed planes and helicopters flying overhead.

You can watch an Armée de l’air report explaining the story to be played out during the Volfa mission here.