Dogs trained to sniff out water leaks in France 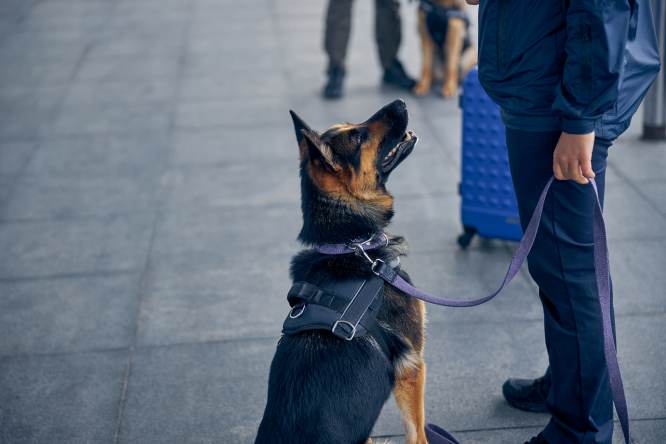 In a first for France, dogs are being used in trials to detect severe water leaks across the network Pic: YAKOBCHUK VIACHESLAV / Shutterstock

Dogs may soon be used to detect serious water leaks across the plumbing network in France after the country’s first-ever trial of the technique began in the south this week.

Three German Shepherd dogs are currently being trained and used to detect water leaks in the town of Teyrau in the Hérault department.

The dogs use their strong sense of smell to discover any underground issues while still on the surface and alert their handler if they find anything. This will allow leaks to be detected earlier and more easily.

François Bourdeau, handler for one of the dogs, Nina, told France 3: “Now we can show people this work, and tell them: ‘This is where you have a leak’.”

The trial came after network manager Veolia, which is working in partnership with the army on the project, hit upon an idea.

David Maisonneuve, Veolia network expert, said: "It started because we know that we have chlorine in our networks, and when there is a leak, the chlorine comes out of the pipes. So we wondered if there was technology capable of detecting it and the idea of dogs came up.

“We know that dogs work in a lot of different areas, including for missing people and explosives, so why not water leaks?”

Nina was originally trained to help search for missing persons.

Mr Bourdeau explains: “She’s a working dog, so she loves to ‘work’. But we make it a game for them, so when they come out with us, for them it’s like they’re coming out to play.”

If the trial is deemed successful, the research could be rolled out across the country over the next few years.

Network expert Nicolas Caseneuve, said: “Across the region, we have 9,600km of network. Sometimes we have to work on pipes that are found in places that are really hard to get to using normal methods.”

The new method could be especially good news for areas in France that suffer severe leaks relatively often. For example, the city of Nîmes loses around half of its water in the countryside, the equivalent of seven million m3 per year.