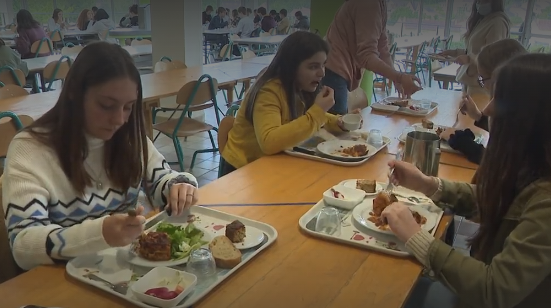 Meals served in the canteen at a collège and lycée in the Dordogne is the first in France to be awarded a prestigious organic label.

Some 570 students of the Cité Scolaire Alcide Dusolier, in Nontron, who eat in the canteen have been served organic, locally produced food which is prepared on site.

The school canteen is the first in France to be awarded the Ecocert 100% organic cuisine label.

Chef Nicolas Lamstaes said most of the ingredients used in the daily menu are sourced from within 20km of the school.

A survey was carried out beforehand to work with a dozen local farmers, associations and companies in the Périgord. The department said that prices have not gone up as a result of the switch.

Canteen Secretary Véronique Labarre told Connexion: "It has been a wonderful adventure. It involved a huge amount of work. First to find the suppliers - 70% are local.

"The kitchen staff had to learn to cook in a very different way so that ingredients are all in season and none are pre-packed in plastic. We introduced the change to the pupils very rapidly, in January.

"They have taken a little time to get used to the new-style menus, but they are beginning to really appreciate them."

Asparagus in a sauce with capers and cornichons.
Grandmother's recipe for chicken with garlic, potatoes and carrots seasoned with paprika
Tomme ewe's cheese
Bowl of cut fruit

"Three years ago, in high school, it was more industrial, more fries, more frozen meats. Everything is good, tasty," one student told Franceinfo.

The Dordogne has pioneered local, organic food production for school canteens. It now plans to extend the scheme to nursing homes.