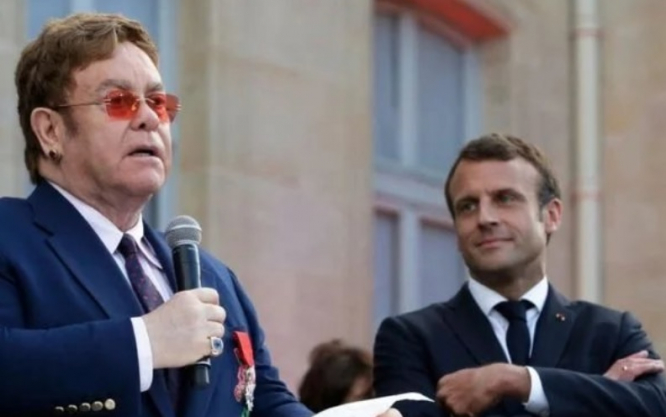 Mr John was at the Élysée Palace in Paris - on the day of Fête de la Musique (June 21) - to receive the Légion d’Honneur - France’s highest civilian honour, for his work in music and against AIDS. The singer is currently in France as part of his global Farewell Yellow Brick Road tour.

During the ceremony, both the star and the President spoke of Mr John’s longtime work in the fight against the disease, through the Elton John AIDS Foundation, which was set up in 1992 and has raised over $400 million to support anti-HIV and AIDS causes worldwide.

In front of 2,000 people assembled in the Élysée courtyard, Mr Macron called Mr John “an icon”, and said: “This commitment to music and in the fight against AIDS is the story of your life, dear Elton...AIDS still exists, still hits, and continues to advance.”

Mr John, who attended the ceremony wearing pink glasses, and a jacket bearing the title of one of his hit songs, Benny and the Jets, said he had “a deep love story with France”, and thanked the country for its continued involvement “in the battle against AIDS'', which he said needed to continue.

I need your help to save 16 million lives. Join in, I'm counting on you. pic.twitter.com/AAYRfuD0J4

He thanked the President in French, before saying: "It is so humbling to stand here and to be given such an honour from France, for which I am profoundly grateful.

"I have a huge love affair with France, I have a house here, I've always loved coming here. I love the French culture, the way of life, and the French people. As a musician, to receive this award on the day of Fête de la Musique, makes it even more special.

"I also want to take this opportunity to thank you, and the people of France, for an act of great generosity and leadership. Later this year, France hosts the replemishment of the Global Fund for AIDS, TB and Malaria - an institution to which France helped give birth, which has saved millions of lives...this is of great importance to me."

The President recalled the fundraising goal for the next triennial conference of the Global Fund To Fight AIDS, Tuberculosis and Malaria - set to take place on October 10 in Lyon - of US$14 billion (€12.2 billion), and called on the international community to help.

Mr Macron said: “We have so much still to do to continue to convince people to protect themselves, and [show them] that this is not an issue for the previous generation, but for young people today.

“Everywhere in the world, AIDS, tuberculosis and malaria still affect millions of people, with crushing inequality, because the poorer you are, the more you are affected.”

Congratulations to Elton for being honoured with the Légion d’honneur for his @ejaf work Awarded by President @EmmanuelMacron, the pair also discussed the Global Fund replenishment so essential to defeat and #EndAIDS. pic.twitter.com/TtvzVFAu8i

He continued: “It is simple, we are at a critical point. Because we do not know if we are going to have this money for the next three years. I need one thing: that you make our lives impossible, for us, the leaders. I have seen young people do this with vigor for the climate, reminding us that it was not enough.

“[So] I need you to save 16 million lives. I need this energy. I need this indignation throughout the world. We have 110 days left [until the conference] to make it so that millions of lives are saved. This amount is the minimum we need to avoid epidemics.”

Mr Macron said that the global AIDS fund had saved 27 million lives since its creation in 2002.

But Aurélien Beaucamp, president of the French non-profit anti-AIDS and hepatitis association AIDES, said: “If we want to end AIDS in 2030, as the UN has said, this will not be enough. The role of the President is to call on his counterparts to raise as much money as possible.”