Europe’s largest mural in Paris...but you can’t see it 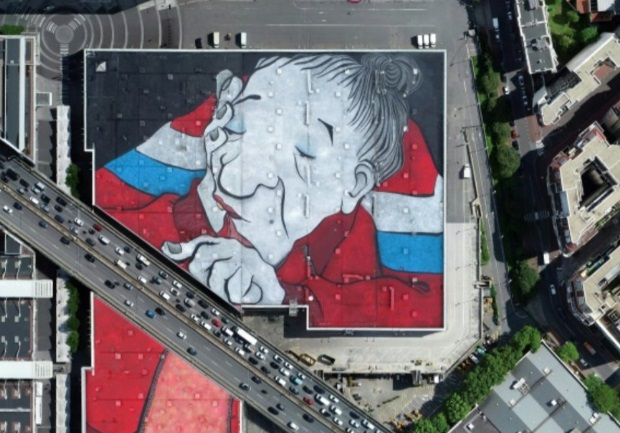 The mural is the largest in Europe, roughly the size of four football fields
By Connexion journalist

The largest mural is the size of four football fields - 2.5 hectares - but is painted on part of the roof of exhibition centre, le Parc des Exhibitions, meaning that it can only be seen from a higher vantage point.

It was painted around two weeks ago by the French duo Ella & Pitr, and is a black, white, red and blue design of an older woman.

In practical terms, it is intended to be seen from the air, meaning viewers either have to use a drone camera to see it, or go to the roof terrace of the Pavillon 7 at the Parc at the Porte de Versailles, near the périphérique Paris ring road, which offers a partially-raised view.

The mural was commissioned by Olivier Landes, founder of urban collective Art en Ville. It was designed to be a project “between street art and land art”, a trend that seeks to play around with nature and our surroundings.

Mr Landes was called upon to help commission the piece by Viparis, the managing company of the Parc des Expositions, as the centre undergoes renovation and modernisation ahead of the 2024 Paris Olympics.

In 2022, the work will be destroyed along with the building it sits on, as part of the renovation plans - which brings another dimension to the meaning of the piece.

Mr Landes said: “It is a work designed for photos on the internet, but it is special, and has its own point of view.”

Ella & Pitr took eight days and several hundred litres of paint to create the work, which is the largest they have created, breaking their own mural size record (previously a piece created in Norway in 2015).

They are known for huge outdoor murals painting on roofs, fields, and walls.

The record-breaking rooftop work comes in the same weekend as another huge painting has been unveiled, this time in central Paris - a 15,000m2, 600-metre-long chain of linking arms in a black-and-white style across the Champ-de-Mars leading from the Eiffel Tower.

Today, it is #WorldRefugeeDay on the Champ de Mars, with NGOs, @Paris @UNHCRfrance. We celebrate the values of solidarity which are so beautifully reflected by the #BeyondWalls gigantic painting by #Saype in support of @SOSMedIntl. Worth admiring from my floors!
V. Flauraud pic.twitter.com/Q0vKkuVESX

Named “Beyond The Walls”, it has been created by Franco-Swiss artist Saype, who worked from 17h to 20h eight days in a row to complete it, despite rain, wind, and the passing of Storm Miguel.

The artist used biodegradable paint, so the work would not damage the earth underneath, and will eventually wash away after about a week.

The piece is intended to pay homage to the sailors who help to rescue migrants in distress in the Mediterranean Sea, as part of the association SOS Méditerranée. The artist said: “It is a mural to help humanity. My work is more social than political.”

Francis Vallat, president of SOS Méditerranée, has welcomed the artwork. He said: “We are in the centre of the City of Light. I hope that this symbol can light up the world and move it forward.”