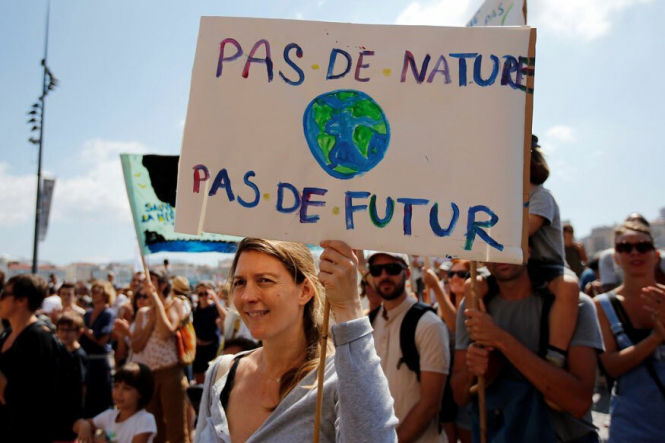 Protesters gathered against climate change, in the first day of a global Extinction Rebellion movement
By Connexion journalist

Several hundred people gathered in Place du Châtelet, and blocked the Pont au Change and the Quai de la Mégisserie in Paris, on Monday October 7, in the first day of a global series of actions against climate change.

Reports said that the atmosphere was calm and good-natured, but determined.

Protesters sat on hay bales and sung songs, with some holding banners on-site with slogans such as: “Here, we are rebelling”, and “Here, we are playing”, along with flags showing the XR logo.

Some police cordons were installed, and self-professed “guardian angels” of the movement - who wore orange vests - were responsible for maintaining order. They assembled between the seated protesters and law enforcement officers, after the latter began blocking access to the Boulevard du Palais.

Looks like they're all set up for the night. #ExtinctionRebellion #ClimateCrisis #Paris pic.twitter.com/l343YLwavn

Some protesters linked arms in groups of four or five people, and threaded their arms through plastic tubes, to make it harder for police to disperse them in the event of an intervention.

Further “rebel” protesters sailed a boat down the Seine River, between Châtelet and the Eiffel Tower, draping their ship with green and red XR flags.

One protester told newspaper Le Monde: “It is no longer the time for debate. I have had enough of talking, I want action against the climate emergency.”

The movement’s Twitter account called on protesters to come to Place du Châtelet, and said: “Our economic system exploits the living, stamps on minorities, and takes our collective future down with it. Faced with this disaster, it is our duty to resist.”

The protest came days after other protesters, also gathering under the XR name, had blocked the Italie 2 commercial centre in Paris on Saturday (October 5), in a “premiere” of the global movement.

Police attempted to move the crowds on, but protesters resisted, and left in the early hours of Sunday morning.

Yet, the Paris police said they had been “shocked” at some of the debris and evidence left behind, including graffiti slogans that appeared to reference the terrorist killings of four police workers that had taken place the Thursday before.

The police department called the slogans “an attack on [our] profession and our dead colleagues”, and said they would be lodging a complaint.

In June this year, climate change protesters on a bridge in Paris were dispersed by police using tear gas, with the photos and videos of the scene prompting widespread condemnation. An inquiry into the incident has been opened.